NYC’s skyline is pretty well-known, even to those who have never been here, and many of the city’s skyscrapers play an important role in city and world history. One such building is the iconic Woolworth Building, and we had the opportunity to take a very special tour this past summer with Helen Post Curry, who is the great-granddaughter of the Woolworth Building’s designer, Cass Gilbert.

History of the Woolworth Building

At the beginning of the 20th century, Frank Woolworth, the owner of the famous Five and Dime stores, commissioned Cass Gilbert to build him a new Woolworth headquarters in downtown Manhattan. Once completed in 1913, the Woolworth Building became the tallest building in the world, and it held that record until 1930 when it was surpassed by the Chrysler Building and then the Empire State Building the following year.

The building is 792 feet and 60 stories tall, though it wasn’t actually intended to be that tall when construction first began. Woolworth had originally only been able to acquire ⅔ of the block facing Broadway, so when construction started in 1910, it was to be for a shorter building. 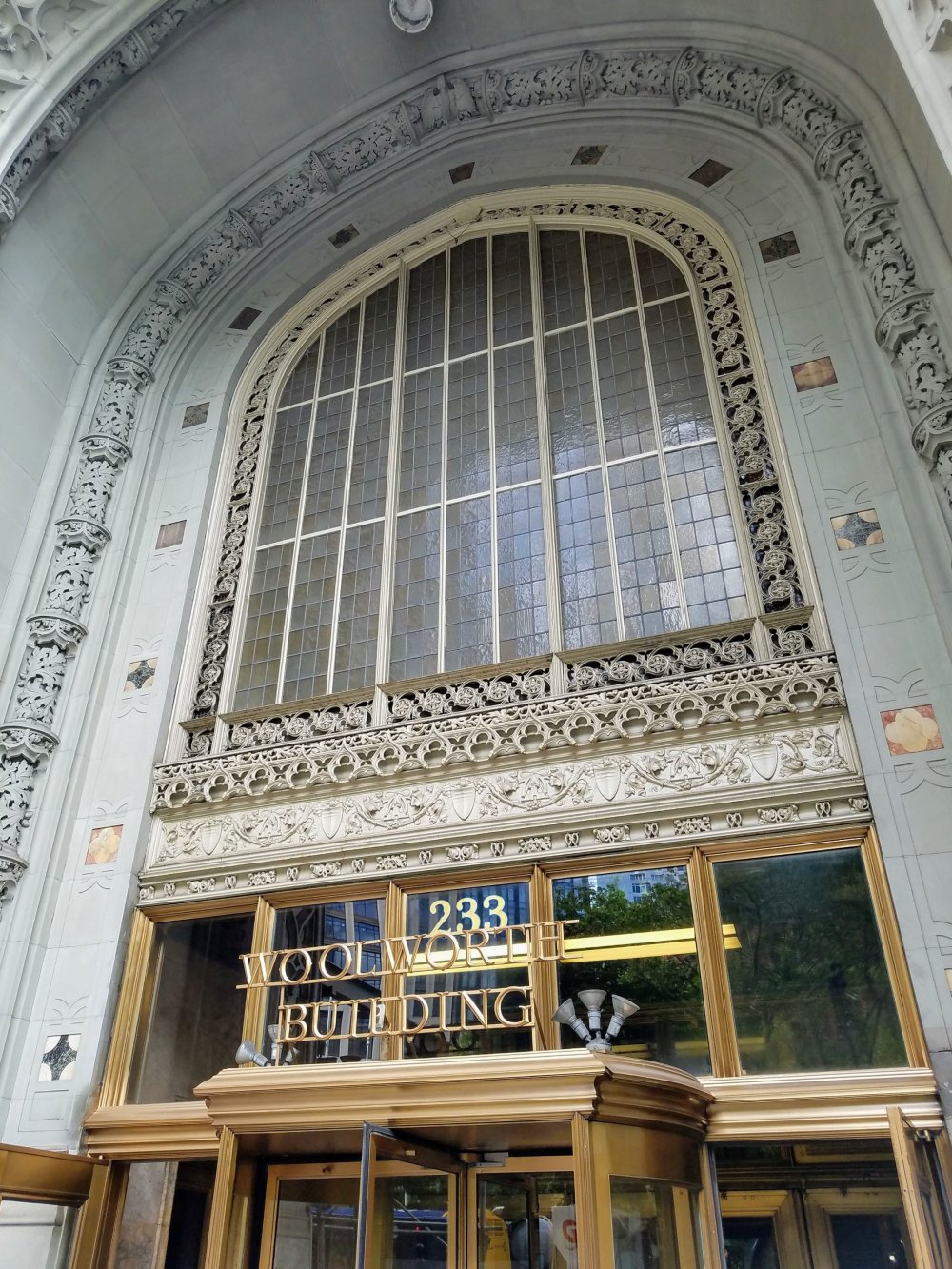 However, a year into the construction, the owner of the remaining third of the Broadway side of the block sold their property to Woolworth, allowing him to build a much larger building. According to Helen, Woolworth then asked Cass Gilbert how tall he could make the building to which Gilbert replied, “How tall do you want it?” And the rest, as they say, is history.

And so, shortly after, on April 24, 1913, the world’s tallest building opened with much celebration and fanfare. Woolworth even orchestrated a publicity stunt whereby President Wilson pretended to push a button on his desk in D.C. at the same moment the Woolworth Building was lit up by floodlights in NYC, dazzling all who were in attendance to celebrate the building’s opening. In that crowd was the Rev. Parkes Cadman who gave the building its nickname the “Cathedral of Commerce”.

The building received National Historic Landmark status back in the ’60s and was later designated an NYC landmark in 1983. The Woolworth Company owned the building until the late ’90s but eventually sold it off after struggling financially for many years (they eventually closed all their stores in 1997, too).

Though the building still has commercial tenants, in 2012, the top floors of the Woolworth Building began to be converted to condos. Now, the owners of these high-end properties are getting their own private lobby so that they can access their homes without needing to navigate through the tourists (like us!) who come to visit this magnificent building and national treasure.

The Woolworth Building was closed to the public after September 11th, but in 2013, Helen Curry and her brother wanted to do something to celebrate the centennial of their great-grandfather’s building.

They received permission from the building owners to run a few tours which ended up being so successful that they were asked to operate tours on a regular basis. Helen and her brother formed WoolworthTours.com, which now holds tours about five days a week. They also offer private tours and work with Untapped New York to provide ongoing tours as well.

Presently, the Woolworth Building is still off-limits to the public, so a tour is really going to be your only option for visiting if you don’t have a reason to be visiting a current tenant. We arranged our own visit through Untapped New York because we saw that they had a VIP tour option available that was offered by Helen Post Curry herself.

Since she is Cass Gilbert’s granddaughter, we thought she would offer an interesting perspective, and she definitely didn’t disappoint! She’s a wonderful tour guide and was an absolute delight to spend an hour with.

We met Helen out front, and once we started the tour, we immediately crossed over Broadway so that we could admire the Woolworth Building from afar. The building has been under quite a bit of construction and renovations in recent years, and Helen commented that it was the first tour she’d done in six years where you could enjoy a view of the full facade without scaffolding or other construction equipment in the way.

And lucky us, the view was beautiful! 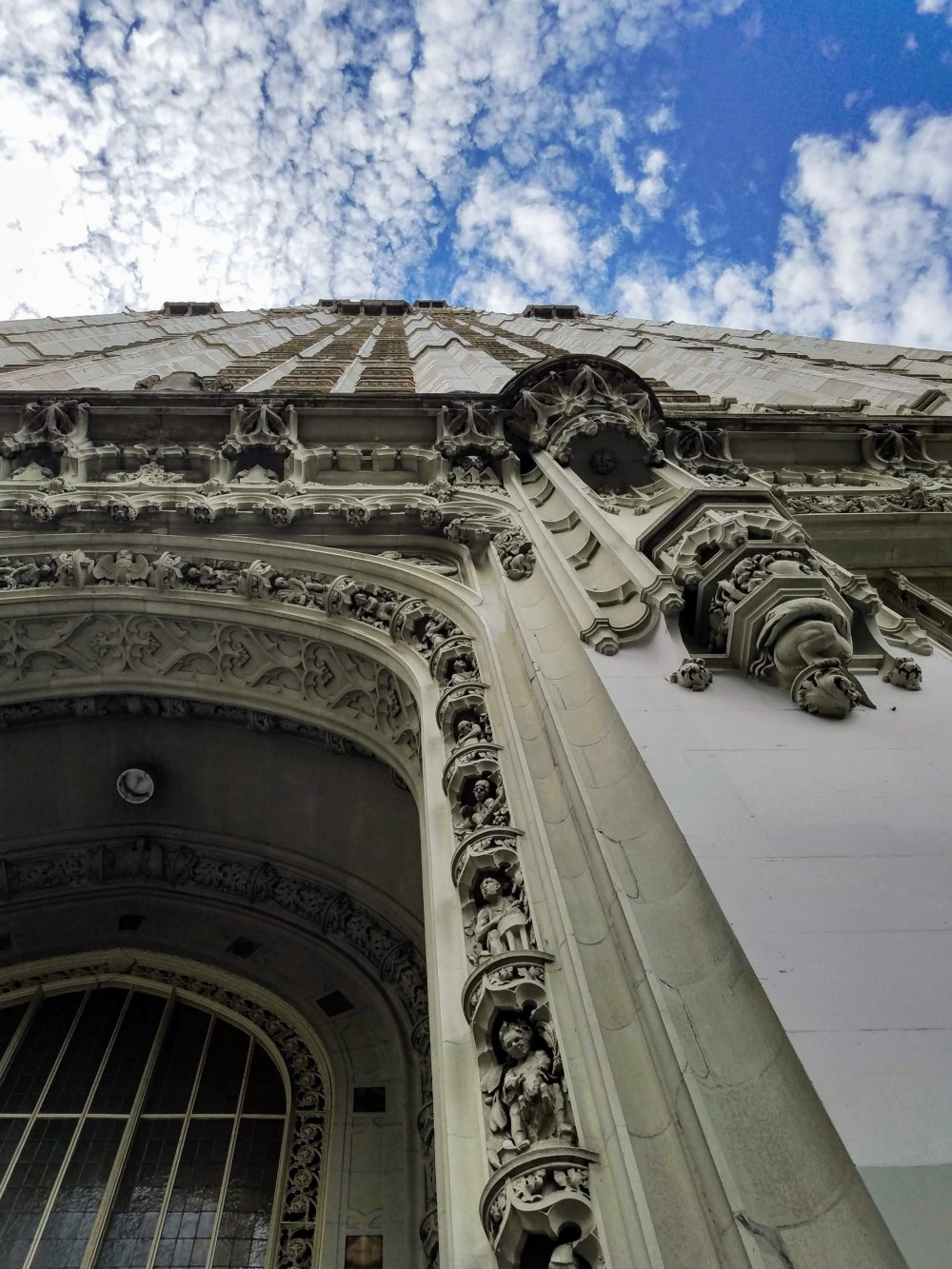 The Woolworth Building was one of the very first steel-constructed buildings, which is part of what allowed it to be so tall. As we admired the exterior, Helen noted that the base is made of limestone but much of the exterior is actually made of terra cotta (it doesn’t provide any support for the building – it’s really just adhered to the exterior).

While standing across the street, Helen mentioned the importance of the Woolworth Building’s location. Not only is it across the street from City Hall, but at the time it was built, there were also several news outlets that were headquartered in the area as well.

Woolworth was no dummy and knew that building his skyscraper in such close proximity to the press was bound to give him tons of exposure every step of the way. He was a marketing man ahead of his time!

Next, we headed into the magnificent lobby, which is mostly made of Vermont marble and plaster (even the features that look like wood are really plaster for the most part!) As we walked down the hallway, Helen immediately had us note the beautiful elevators that line the main hallway of the lobby (there are actually 24 elevators in the lobby!).

Tiffany Studios had designed the fronts of the elevators, but they were late in delivering them and consequently lost the commission to design the one aspect of the lobby that immediately catches your eye: the ceiling.

After Tiffany lost the commission, the task to design the ceiling was passed on to the firm of Heineicke and Bowen, and boy did they deliver! The mosaic-tiled ceiling is jaw-droppingly beautiful. Everything from the colors to the imagery used is just spectacular, and Helen gave us all a good moment to just stand and stare up at it. 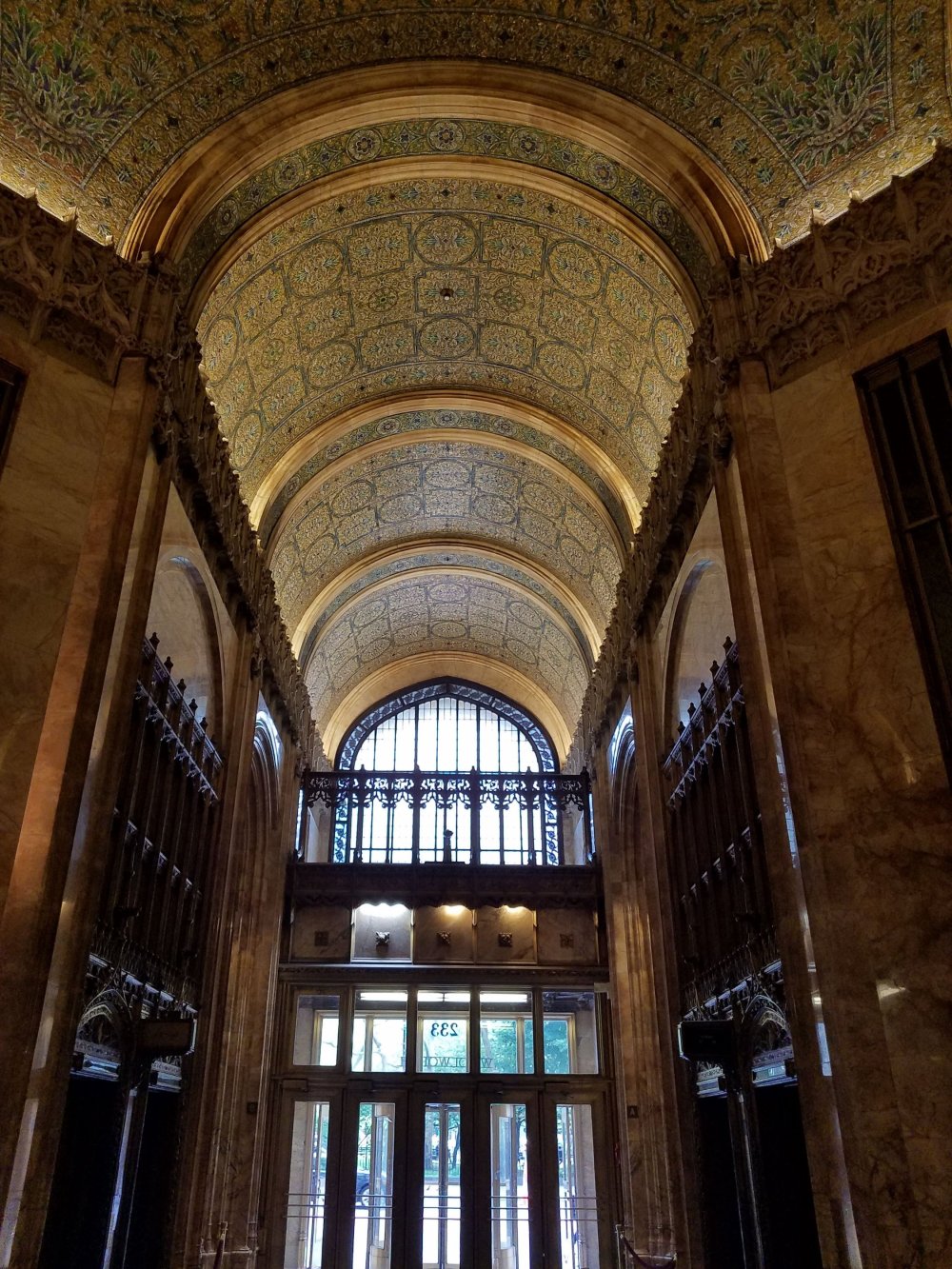 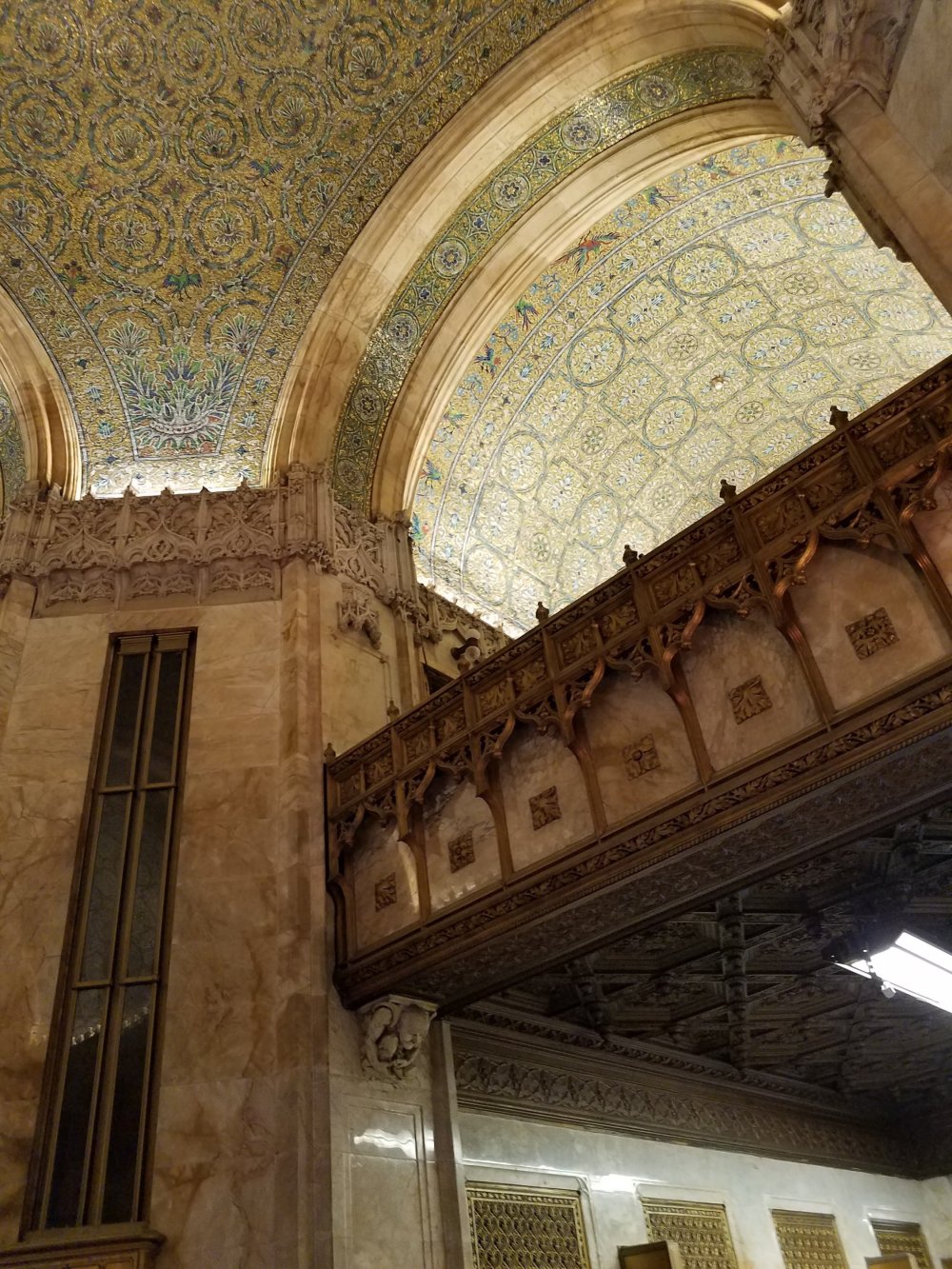 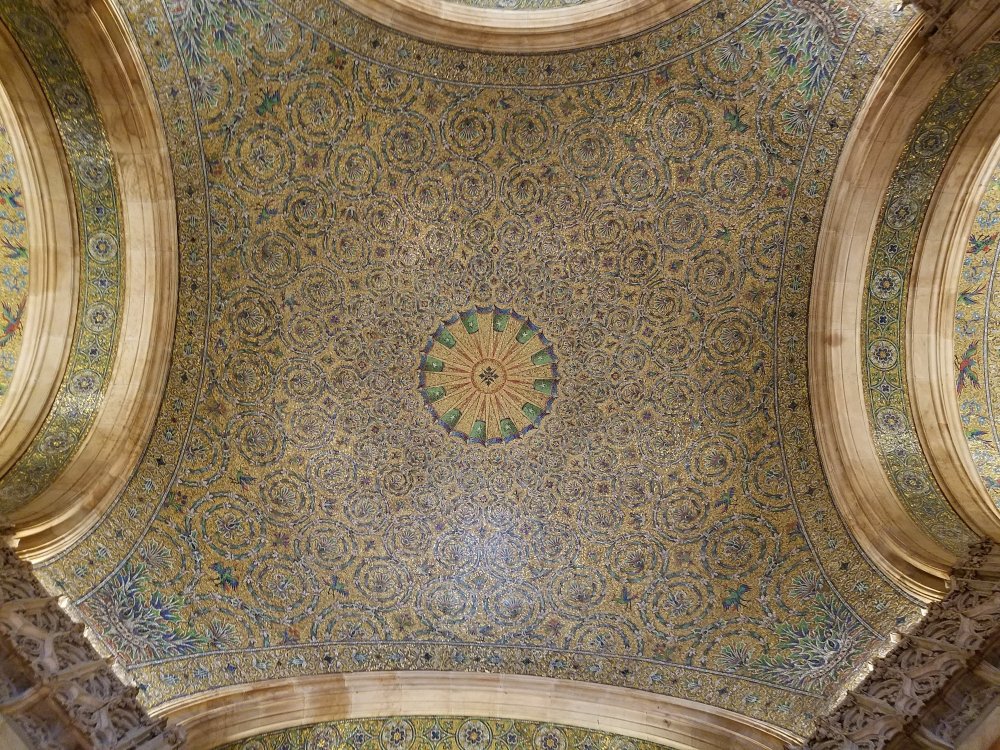 As you move past the main hallway and current lobby desk, you enter a second lobby area. Here you’ll find a staircase that would have once led you up to the Irving National Bank, which was the Woolworth Building’s anchor tenant when the building opened (the Woolworth Company itself actually only used two floors in the building when it first opened). The bank maintained offices on three floors of the Woolworth Building, as well as a special space in the basement that we’ll get to shortly.

In this section of the lobby, you can admire a lovely skylight up above, also designed by Heineicke and Bowen. We all climbed up the steps to the former bank’s entrance to admire the view from up there. Anyone who was planning to use Irving National Bank at the time would have certainly been impressed with the bank’s new digs.

And it was surprising, too, just how much more grand the whole lobby looked from the top of those stairs! Nowadays, NYU’s School of Professional Studies uses the old bank’s space for classrooms. I actually took a photography class there wayyyy back in the day, but they have their own entrance so I had no idea how beautiful it was inside the main lobby.

Yep, you could ride the train to the Woolworth Building, go upstairs to do some shopping, and then head back down into the subway without ever needing to go outside!

These days, the subway no longer connects to the building and rumor has it the tunnels have been filled (though it wouldn’t surprise me if they were actually still there but just under a whole lot of security.) They have bike storage downstairs now, and another very, very cool feature: the Irving National Bank’s old vault!

The bank left the building years ago, but their vault is still there and these days it’s used by workers in the building for storing tools and supplies. Helen gave us all a chance to walk by and peek inside, and she was delighted to show us one area where the vault door appeared to have crushed in an AC vent – oops! Guess no one took into account the fact that you might want to be able to move the doors after installing the AC…

Before Helen wrapped up our tour, we were treated to one last section of the building. We rode the elevators up to the second floor and found ourselves on the mezzanine level balcony, where we were able to look out onto the lobby. 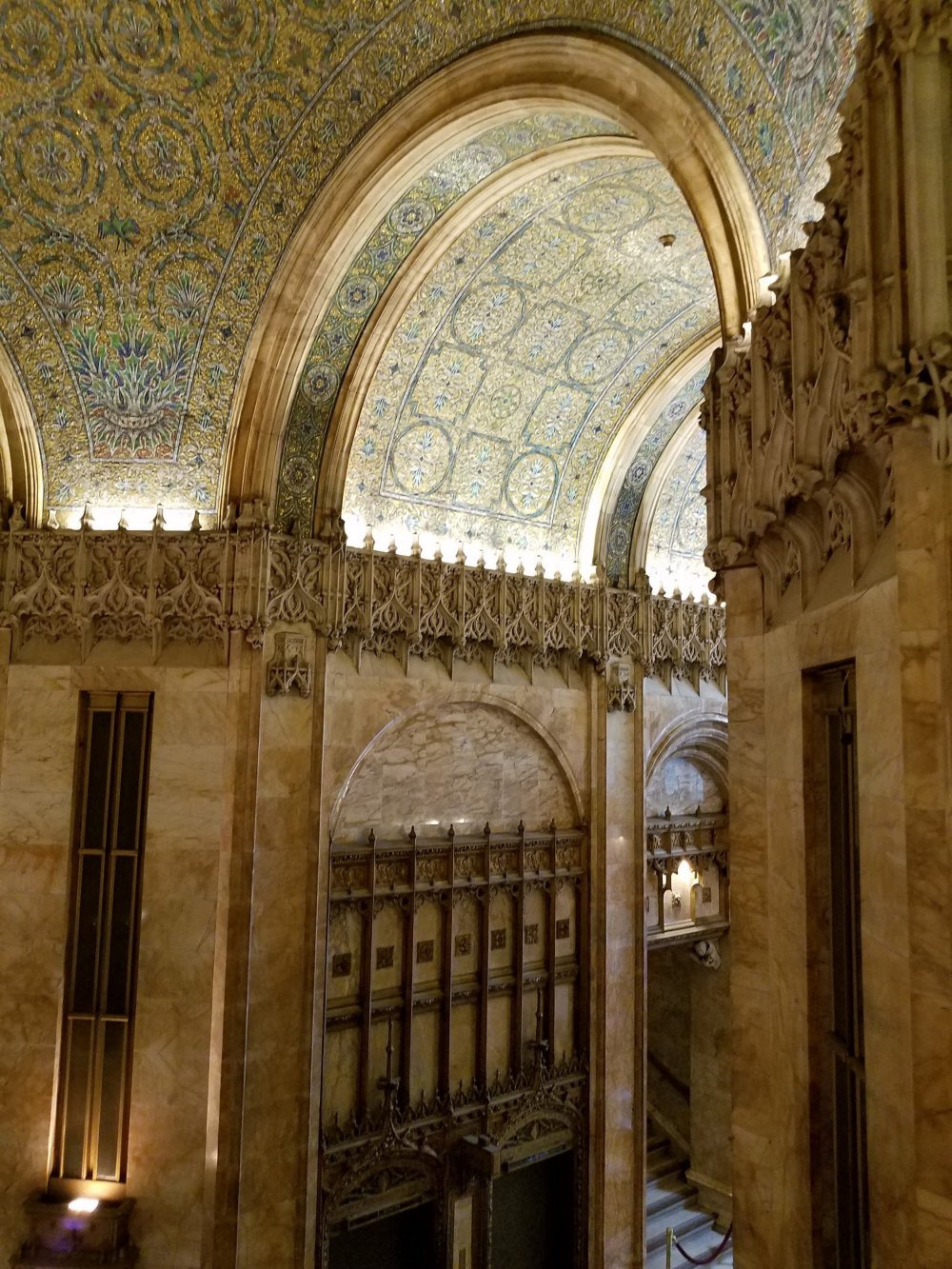 There are two balconies on the mezzanine level – one on each side – and even tenants aren’t permitted to access them. You may only visit them on a tour, and they do offer a spectacular view of the building’s lobby.  They also allow you to get much closer to the gorgeous mosaics on the ceiling and the two murals above each balcony so that you can admire all the intricate details. 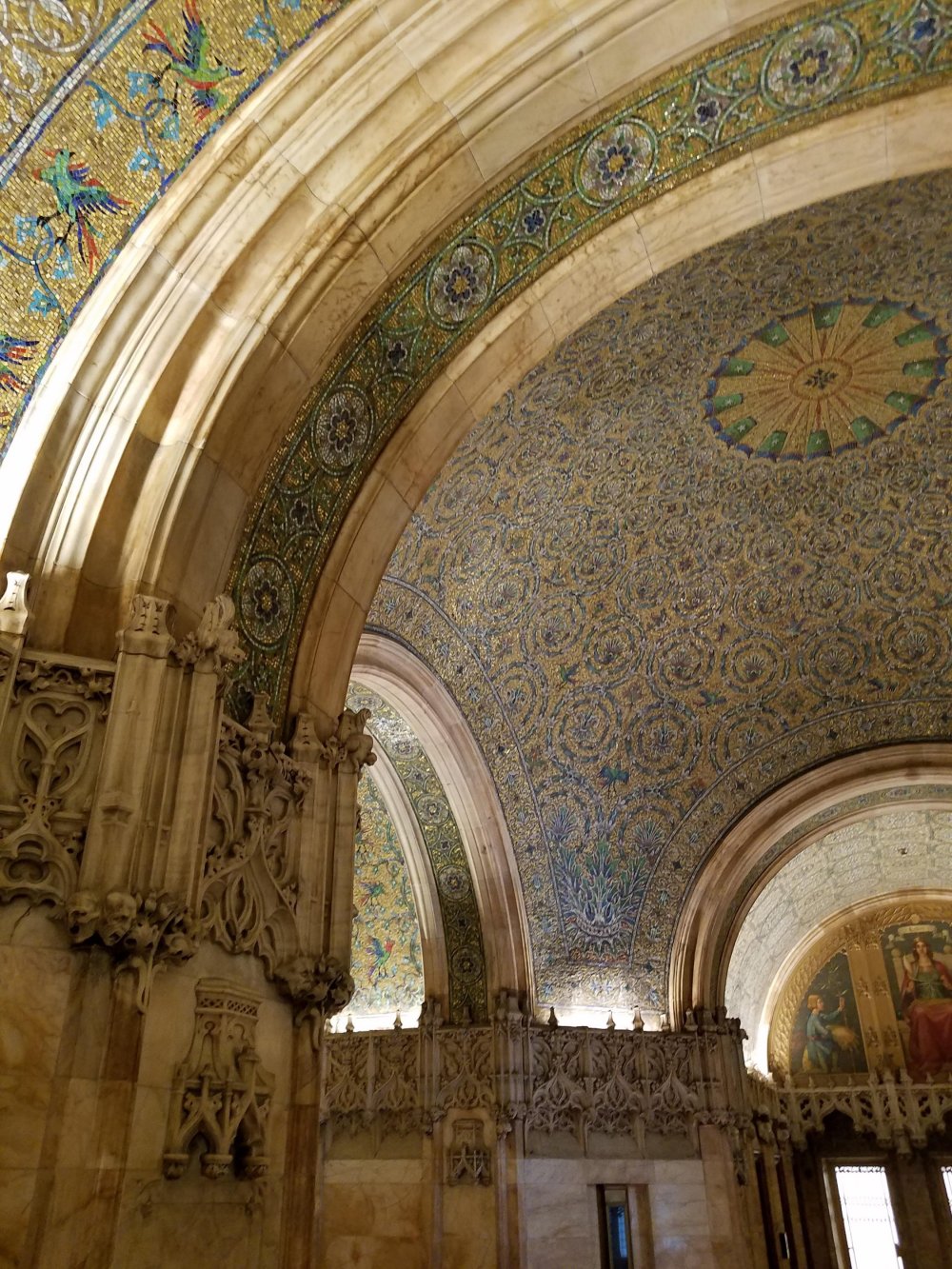 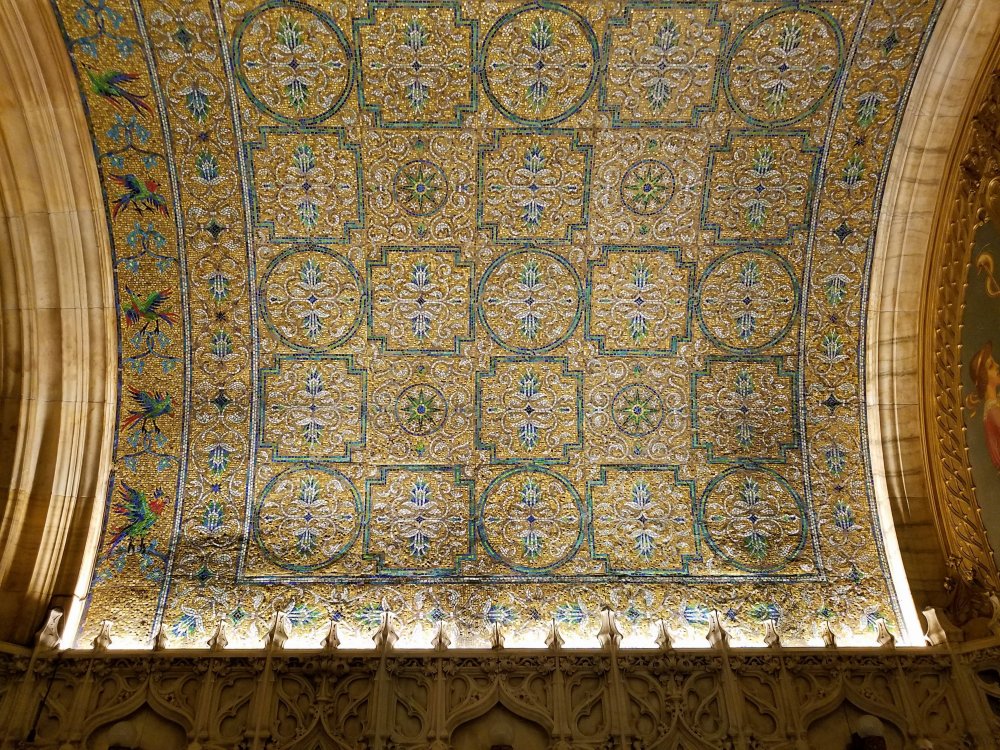 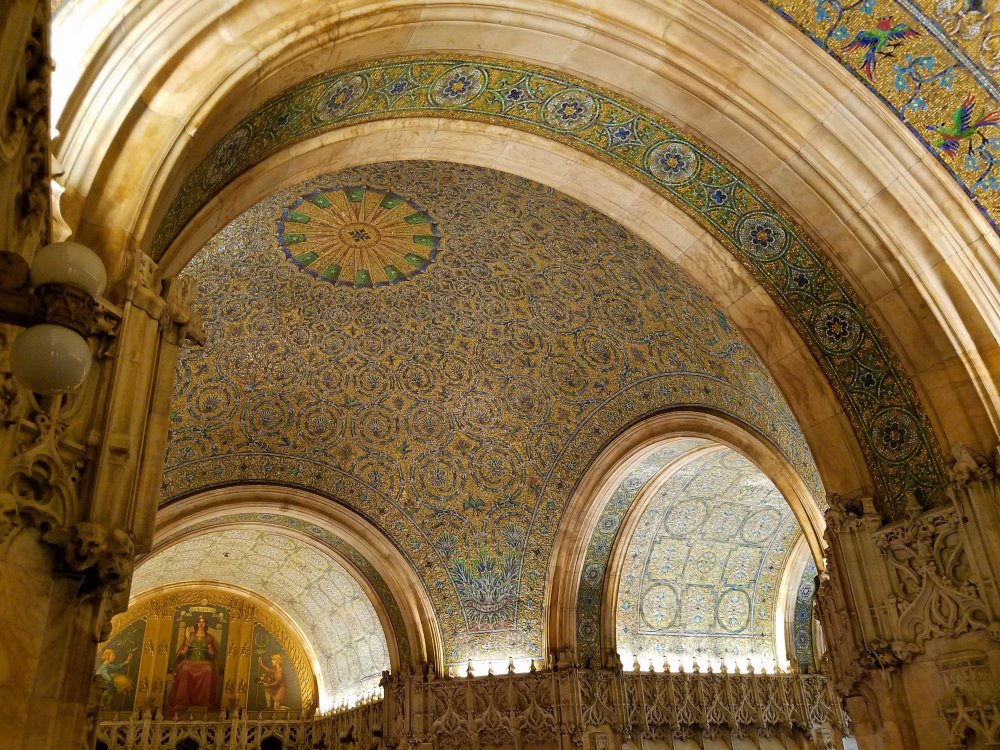 While on the balcony, Helen pointed out several figures carved into the stone which are called corbels. These little guys are ALL over the Woolworth Building (as is the letter “W” – apparently Woolworth was a proud fellow), but Helen mentioned that most of them were just random people or creatures.

As we headed back down to the lobby and main entrance, though, Helen pointed out several more corbels that actually did depict real people, including Woolworth, Cass Gilbert, and several other individuals who had been involved in the construction of the Woolworth Building.

Sadly, this is where our tour ended. We had hoped we’d get to go up into the tower or down to the secret swimming pool in the basement, but alas, those areas are off-limits, even to tour groups. Untapped New York does have a fun article, though, that highlights some of these spots (and others) that their staff was invited to access.

Our visit was quite a whirlwind and Helen kept us moving at a brisk pace, but the building is stunning and well worth a visit. You would expect it to be grand, but I had no idea just how grand it truly is! If you live in the city or find yourself downtown sometime soon, sign up for a tour so you can visit this incredible building, too!