My husband and I have been wanting to hike in the New Jersey Palisades for a while now. The massive cliffs always look so beautiful from the New York side of the river, and we knew the views from the top were spectacular since we’ve stopped at several lookouts on prior drives up the Palisades Interstate Parkway. What we didn’t know, though, is that the Palisades are full of the ruins of mansions that were once part of a magnificent area called Millionaires’ Row.

Though the riverfront section of the Palisades had been used for markets, commerce, picnics and the like for quite some time, it wasn’t until the mid-1800s that New York and New Jersey’s wealthier citizenry began to develop the hilltop section of the Palisades. It’s somewhat difficult to believe it took folks so long since the views from the top are pretty incredible, but the secret did eventually get out.

Throughout the latter half of the 19th century, sprawling estates started to crop up and expansive cliff-side homes began to be built. Eventually, more than a dozen mansions dotted the cliffs of the Palisades, overlooking the Hudson River and New York across the way. And, fittingly, this area eventually came to be known as “Millionaires’ Row” since all the estates were rather grand and served as homes (and in many cases, summer homes) to sugar barons, wealthy merchants, and even John Ringling of circus fame.

Part of this land deal, though, was that all man-made structures within the Palisades had to be removed. The mansions were torn down to their foundations and the area to the east of the Parkway was left to return to a more natural state. And thus, Millionaires’ Row was no more…

At least most of it anyway. Nowadays you can still find a few remnants of those grand structures, and you can actually check out several ruins all in one hike!

Finding the Ruins of Millionaires’ Row

There are more than 30 miles of trails in the Palisades Interstate Park, and two main trails stretch nearly the entire length of the park. The lower trail is the white-blazed (and aptly named!) Shore Trail, which follows the river’s edge throughout the park. The other main trail is the aqua-blazed Long Path trail, and it follows the top of the cliffs. The hike I’ve outlined below will allow you to cover stretches of both with a couple ups and downs on two other shorter trails in between.

When we set out in search of Millionaires’ Row, we started our hike in Alpine, NJ at the Alpine Boat Basin. There was a $5 charge to park here, and it was cash only (there may not be a fee in the off-season, but bring some cash just in case). Though there were already a ton of cars there, there were also still plenty of places to park.

Most importantly, there were restrooms! Oh what a rarity when one goes hiking in NY and NJ these days. There are also several picnic areas scattered about in case you want to bring a lunch, and there was a small snack stand as well if you’re less prepared.

We essentially did the hike that the Park refers to as the Huyler’s Landing History Hike, but we did it in reverse order so we could get the big climb out of the way right at the beginning. And though they list this as a 5-mile hike, my husband and I have our doubts. My FitBit clocked over 15,000 steps, so maybe plan for this to feel more like a 6+ mile hike by the time you’re done.

From the boat basin, we headed to the northern end of the parking lot and picked up the white Shore Trail to start our ascent. You’ll find it near the marker for the Old Alpine Trail. Soon after, the trail splits and we headed to the left to follow the orange-blazed Closter Dock Trail up to the top of the cliff.

The Closter Dock Trail was once actually a road (which I find somewhat terrifying because it’s rather narrow and steep), and you’ll be climbing up more than 450 feet before it levels out. The terrain is super rocky and uneven, so you’ll want your hiking boots ready to go before conquering this trail.

If you’ve seen the Palisades from New York, you know they are tall and pretty much straight up. Fortunately, you’re not climbing straight up but instead will hike several switchbacks to make your way up to the top. At the first switchback after you join the Closter Dock Trail, look off to the left to spot your first set of ruins!

After carefully exploring for a little while, continue uphill on the Closter Dock Trail. Eventually you’ll come to a tunnel – head through that and up the stairs on the other side. Then you’ll want to go to your left, following the aqua blazes of the Long Path.

The orange and aqua blazes will remain co-aligned for a little while and eventually the orange trail will split off to the right and head under the Parkway, but you’ll want to continue on to the left with the aqua Long Path.

At this point, you’re fully on top of the cliffs, and there are several spots where you can veer off the aqua path to take in some views of the river and New York off in the distance.

You’ll also start to encounter more ruins as you continue along the Long Path. Some will be small and mostly just the remains of foundation walls, stone fences, etc. and others will be more significant.  For example, these ruins here! 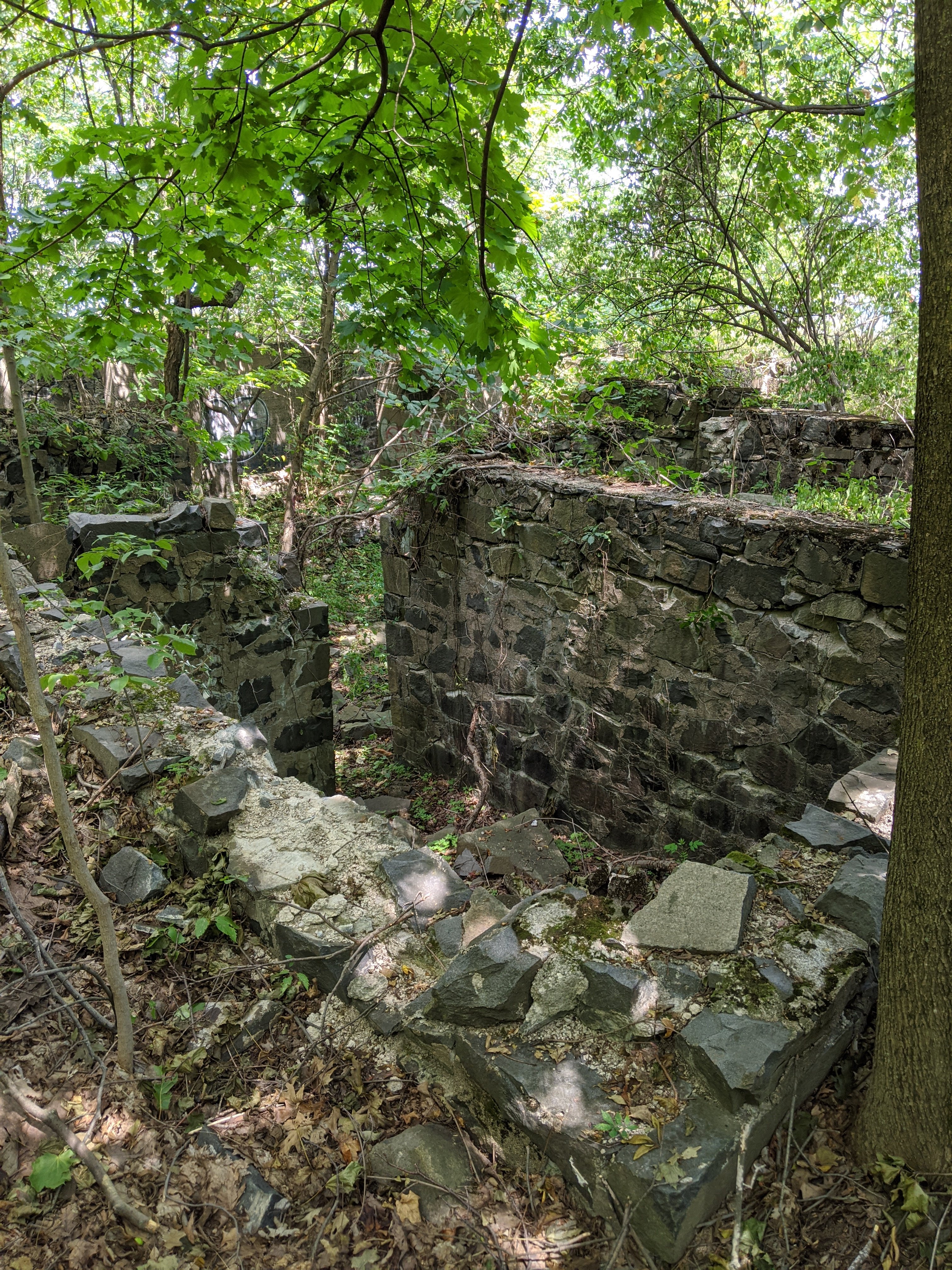 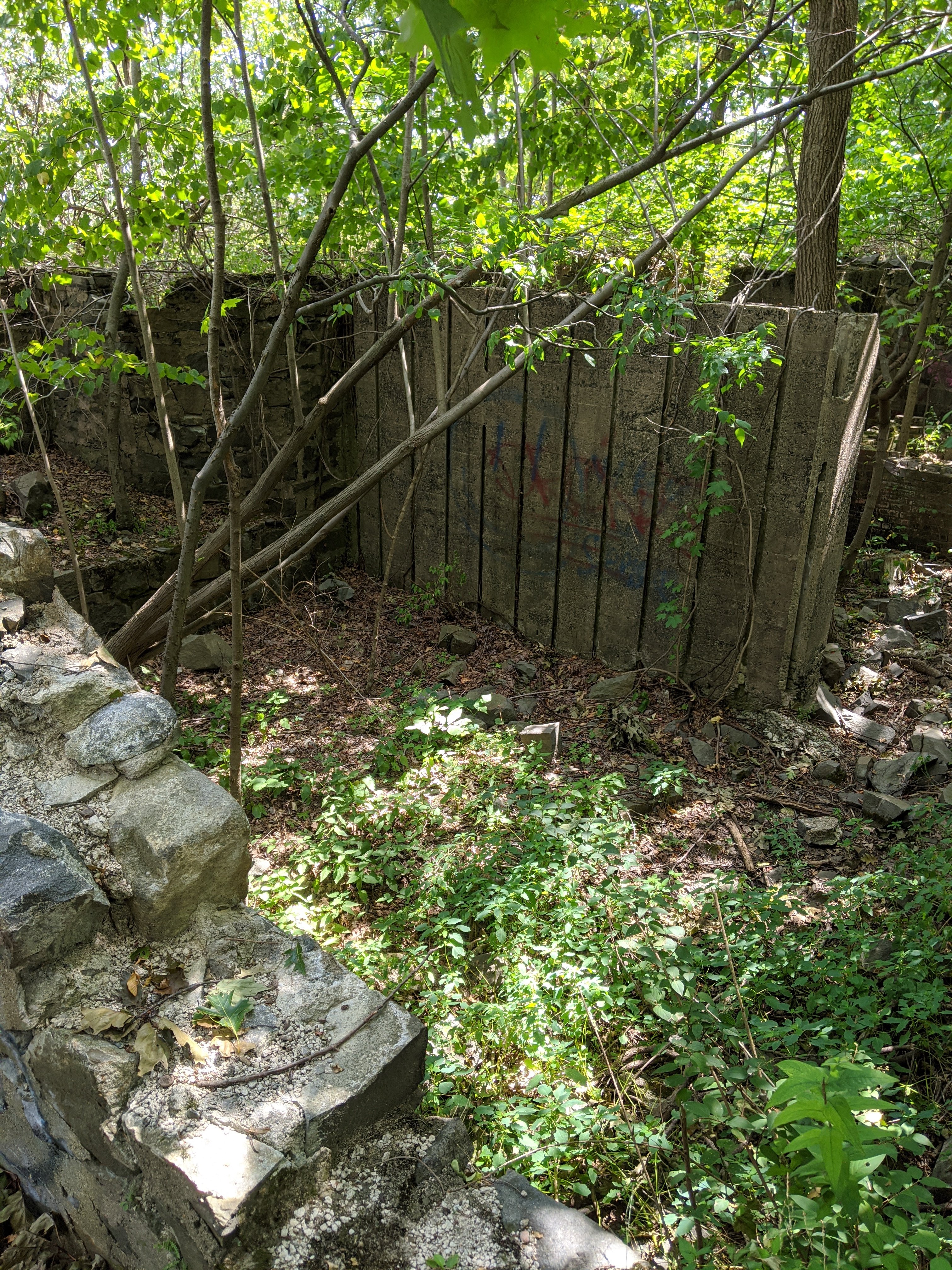 As you continue along, you’ll come across another set of ruins, including the old retaining walls from what used to be a terraced garden. 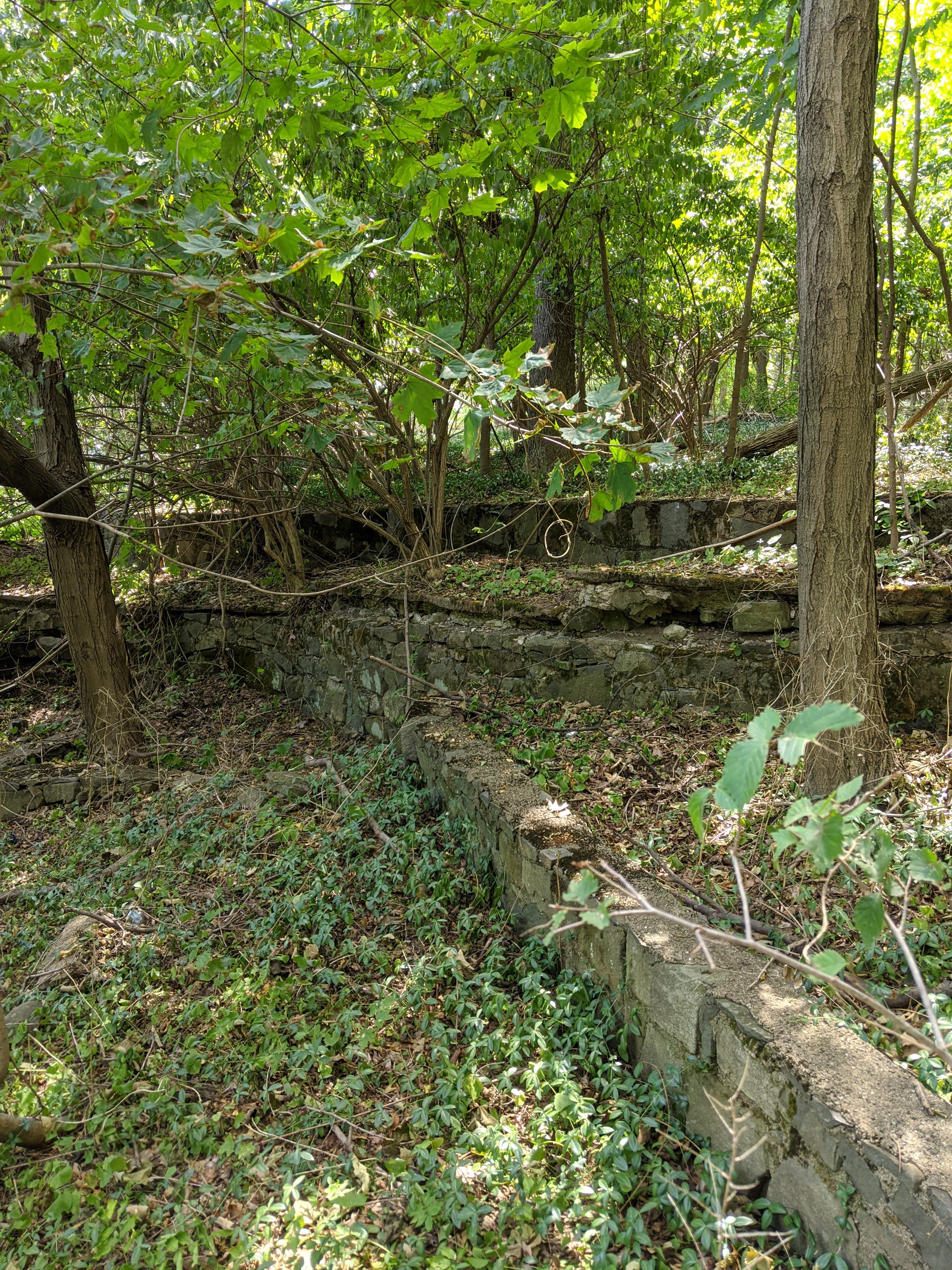 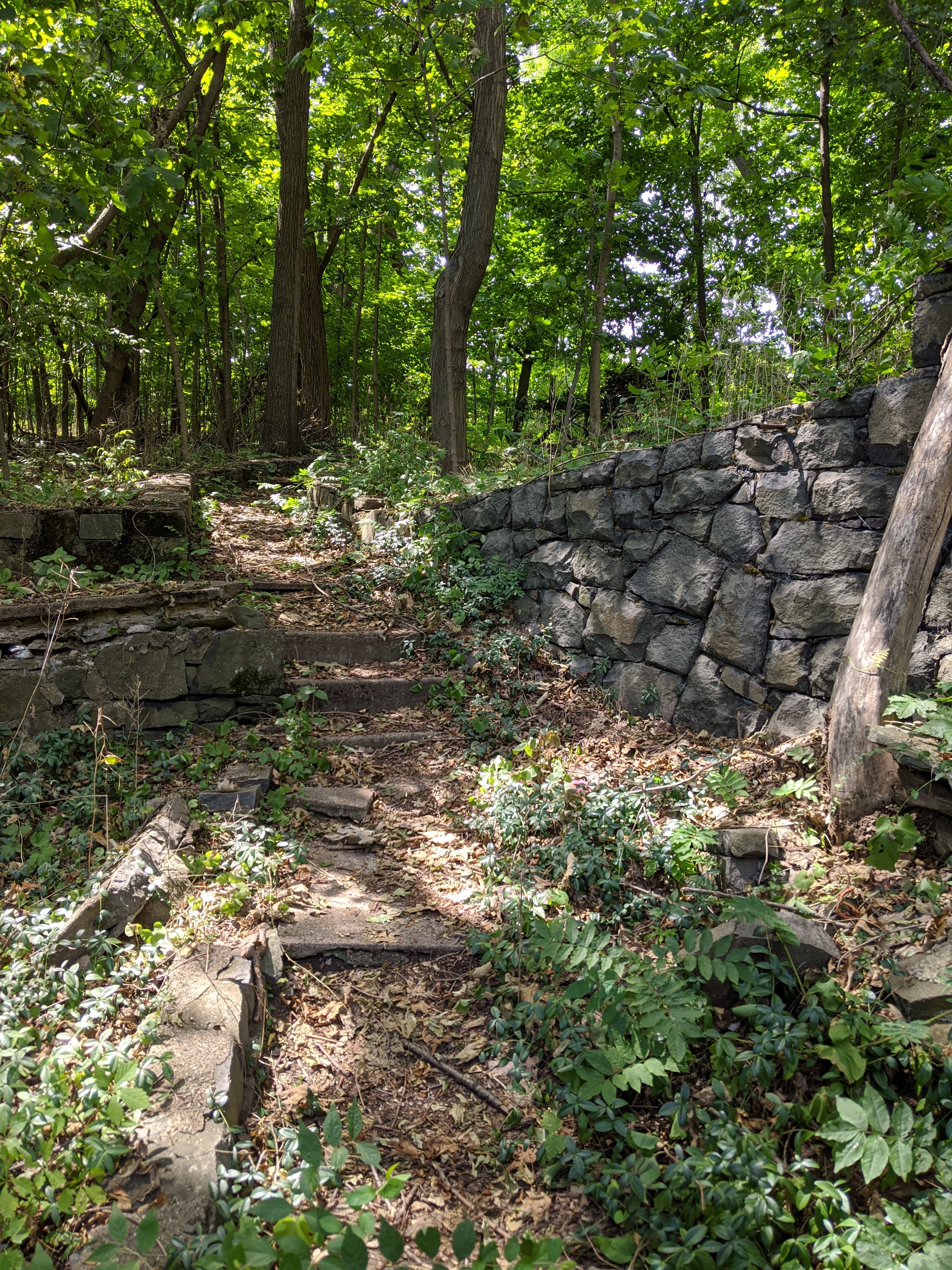 Soon after, you’ll find the most extensive set of ruins from Millionaires’ Row. Below you can see what remains of the garage and basement of Cliff Dale, an estate built in 1911. Cliff Dale, the summer home of George Zabriskie, included a 15-room house and 25 acres of land until it was sold to Rockefeller. (You can see some old photos of Cliff Dale and learn more about its history here.) 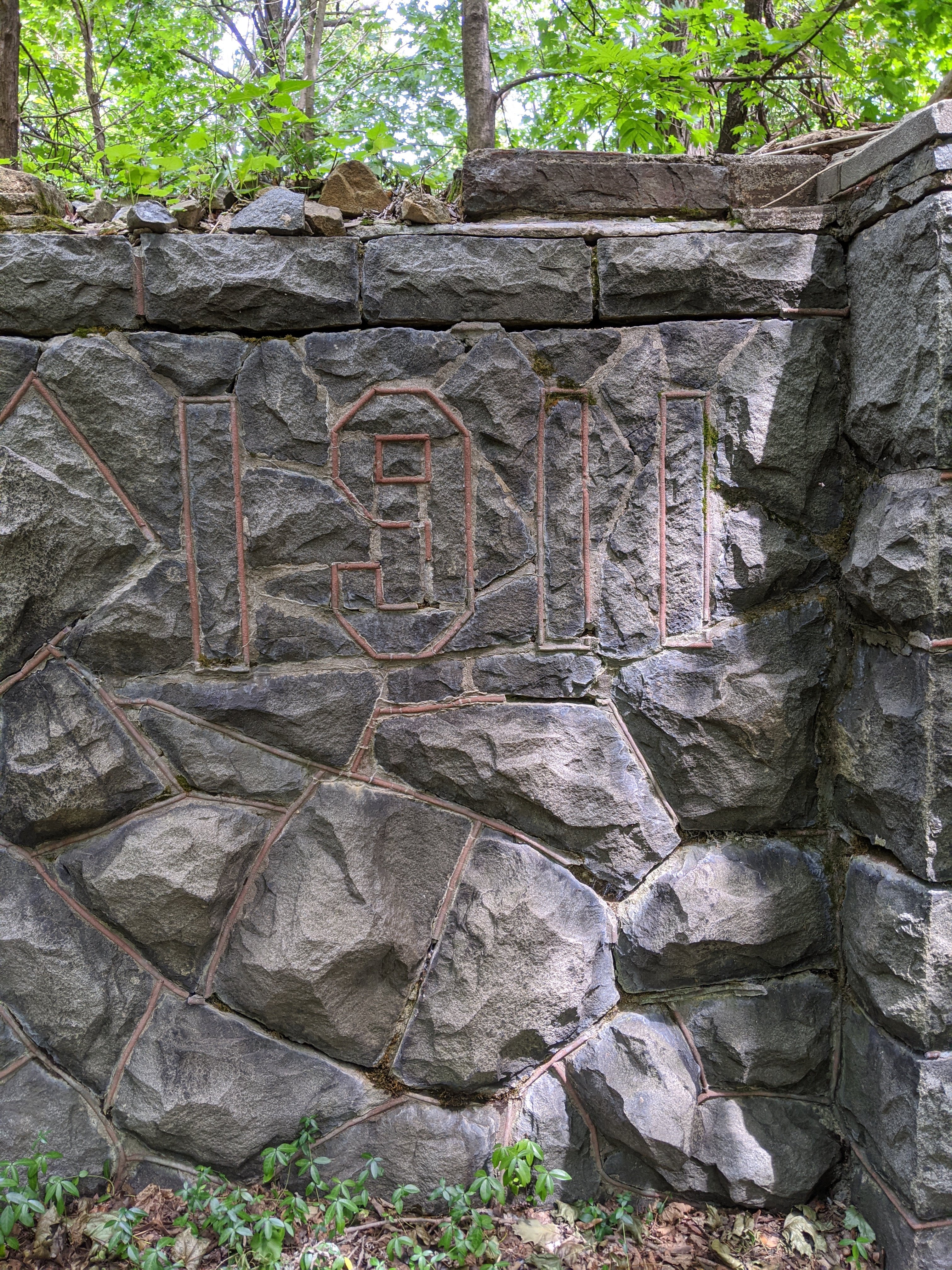 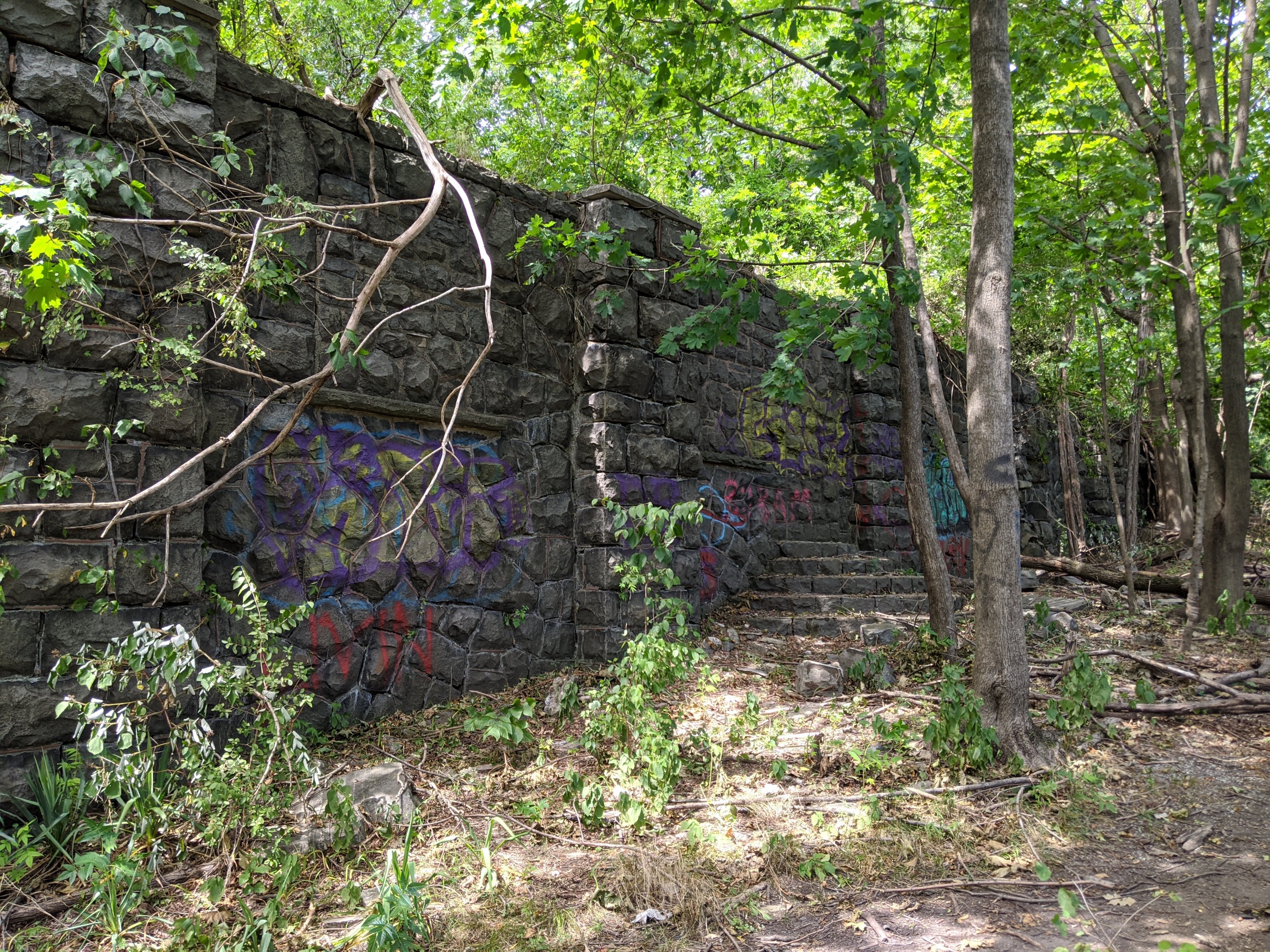 Back on the Long Path, you’ll eventually come to the Alpine Lookout. This is the location of the former Rio Vista estate, the largest of all the estates that sat atop the Palisades. Rio Vista once encompassed 200 acres and belonged to a sugar baron named Manuel Rionda. Now, there are just some stairs that are still visible today, and the iron fence along the cliff’s edge is also original to the estate.

At the southern end of the Alpine Lookout,  you’ll pick the aqua Long Path back up for a little ways before turning left onto the red-blazed Huyler’s Landing trail. This trail is described as an “old farm road” but clearly a lot has changed in the landscape since then because the trail is very narrow! It’s also steep and very rocky and we didn’t enjoy going down it all that much.

NOTE: We were already getting tired at this point and really could have used some trekking poles to make the descent a bit easier on our knees and ankles. If you want an easier descent, do this hike in reverse so you can come down the orange trail instead. Both are rocky and uneven, but the orange trail seemed better maintained and would likely make for a safer, easier descent.

Eventually, you’ll cross over the paved Henry Hudson Drive before picking up the last section of the red Huyler’s Landing trail. And soon after, you’ll find yourself along the banks of the mighty Hudson River. There’s a little jetty here where you can take a water break and enjoy the view. There are also a couple historical markers that provide some details about Huyler’s Landing.

And now you’re in the home stretch! From here, turn left to head north along the white-blazed Shore Trail (keep the river on your right) for the last mile of your journey. This trail is also rocky and uneven in parts, but it’s a fun hike, including a couple cool stairways and narrow passages through the boulders that have made their way down the hill over the years. Enjoy this last little stretch of trail, and before you know it, you’ll be back at the Alpine Boat Basin!

Since the Palisades are so close to the Parkway, you should know that this isn’t going to be your typical quiet and secluded hike (you can find better options for that kind of hike here!) However, the views from atop the cliffs are stunning, and finding the ruins makes this a fun day trip in general.

If you prefer to experience the Palisades with less highway noise, you can always just stick to the Shore Trail and enjoy the cool breezes off of the river. Also, since the park’s trail network is expansive, you can even come back several times to enjoy different sections of the park during each visit.

I hope you have a chance to seek out Millionaires’ Row soon – and if you’ve already been, let me know how you enjoyed your own adventure!

And if you enjoy combining a hike with your search for ruins, check out the Welwyn Preserve next time you’re on Long Island, too.