In last week’s post about the Woolworth Building, I mentioned that it had been strategically placed across the street from NYC’s City Hall. It goes without saying that the Woolworth Building is rather grand, and it was definitely an engineering and architectural marvel when it was built. However, it has quite a bit of competition from its neighbor, City Hall, when it comes to beauty. This is not some boring or utilitarian government building, folks. NYC’s City Hall is likely one of the prettiest government buildings you’re ever going to see!

NYC’s City Hall is not the first location for local government in New York City. NYC’s first city hall was actually in a tavern, which kinda makes sense when you consider that taverns were one of the main gathering places for people back in the 17th century. Eventually, NYC’s city hall was moved to a building at the corner of Wall Street and Nassau that was built in 1703. Nowadays, you may know this building better as Federal Hall, which also served as the first official capital of the United States after the U.S. declared its independence.

Around the time of the Revolutionary War, NYC had already been considering moving their city hall further north in Manhattan. It wasn’t until 1802, though, that relocation plans actually moved forward. A competition was held to find a designer, and eventually, Joseph-François Mangin and John McComb Jr. were selected to design the new home for NYC’s City Hall.

Construction began in 1803 and it would take nearly ten years before City Hall officially opened in 1812. In the 1960s, City Hall was granted National Historic Landmark status and was added to the National Register of Historic Places. It also holds New York City Landmark status.

City Hall is a public building, so anyone can visit pretty much anytime public activities are taking place there. Since it’s a government building, though, security is clearly a concern, so you should be prepared to state your reasons for visiting when you arrive and know that you’ll need to pass through a metal detector before being given access to the building.

I was able to visit City Hall this past June as part of a special after-hours tour offered by the New York Adventure Club. Since this is a city building, the tour was free! (Though you do have to pay a deposit, which is refunded once you check in for the tour.) We checked in outside the main gates, passed through security, and then gathered at the top of the stairs in front of City Hall.

From here, you get a lovely view of City Hall Park, and you can also start to get an up-close view of the building’s architecture, such as the lovely columns pictured below that line the facade of City Hall. While we were outside, our guide also mentioned that anytime any digging needs to happen around City Hall or the park, an archeologist is consulted because they inevitably unearth all sorts of historical artifacts every time they dig in this area (e.g. pottery, coins, and once even a cistern!). You may recall that there is also a pretty spectacular subway station hidden below City Hall, too!

Next, our guide gave us a little background on the building and then we headed into the main lobby. There’s a whoooole lot of marble here, as well as some very cool old iron fixtures. As you look through the archway from the lobby, you’ll also notice that the building opens up to a room that appears to have quite a bit more light in it.

On the other side of that archway is the one feature of City Hall that I just couldn’t stop admiring. You see, here there is a wonderful rotunda with a dome that is covered with a gorgeous skylight overhead. It’s so pretty and almost mesmerizing even to look at – I got a crick in my neck from staring up at it for so long!

Notice anything about these staircases above? They have no supports! Apparently, when City Hall first opened people were afraid to use the staircases because they didn’t understand how they could just be “floating” like this. Its support comes from keystones, and the design is referred to as “keystone cantilevering”. And as our guide said, “They haven’t fallen down yet!”

And as you approach the stairs, stop and look up…

This stunning dome wasn’t actually part of the original City Hall building. In 1858, there had been a different dome, but there was an “incident” involving fireworks that caused the original dome to catch fire. Oops!

From 1912-1915, City Hall underwent a renovation project, and the current dome, supported by ten Corinthian columns, was added to the building at that time. You can’t really stand in this space and not be in awe of the dome – unfortunately, my photos simply don’t do it justice.

Sadly, we had to pull ourselves away.  We headed upstairs to continue our tour, and our first stop was in the Governor’s Room. This basically serves as the main reception room in City Hall, and it’s actually normally closed to the public since it includes an extraordinary collection of portraits, many by the artist John Trumbull. Unless you’re visiting City Hall as part of a tour or for an event that’s being hosted in the Governor’s Room, you won’t likely be able to visit this space.

In addition to the portraits, there is also a collection of antique furniture that dates back to the 1840s, as well as one particularly interesting piece that once belonged to George Washington himself. It was his former writing table, and we know this because someone actually engraved “Washington’s Writing Table” on it. As our guide mentioned, this is probably not something you should do to an antique, but it did help to ensure that this particular piece wasn’t accidentally thrown out at one point!

The Governor’s Room has welcomed quite an assortment of people over the years, including several U.S. presidents, Martin Luther King, Jr., and Nelson Mandela. When Abraham Lincoln won the presidency, he spent hours in the Governor’s Room shaking hands with any New Yorker who wished to meet him. Our guide said the story goes that Lincoln’s arm was so sore by the end of that day that he could barely lift it! After Lincoln’s assassination several years later, his body was also laid in state here, just outside the Governor’s Room.

Our guide let us explore the lower level of the Chamber, which was restored in 2011, while he pointed out yet even more of the amazing artwork that can be found at City Hall. Of note was a painting by Samuel Morse, who you probably know of mainly as the inventor of the telegraph and Morse code. Apparently, he was a pretty good painter before he became an inventor – who knew? I also loved this huge mural that covers most of the Chamber’s ceiling. 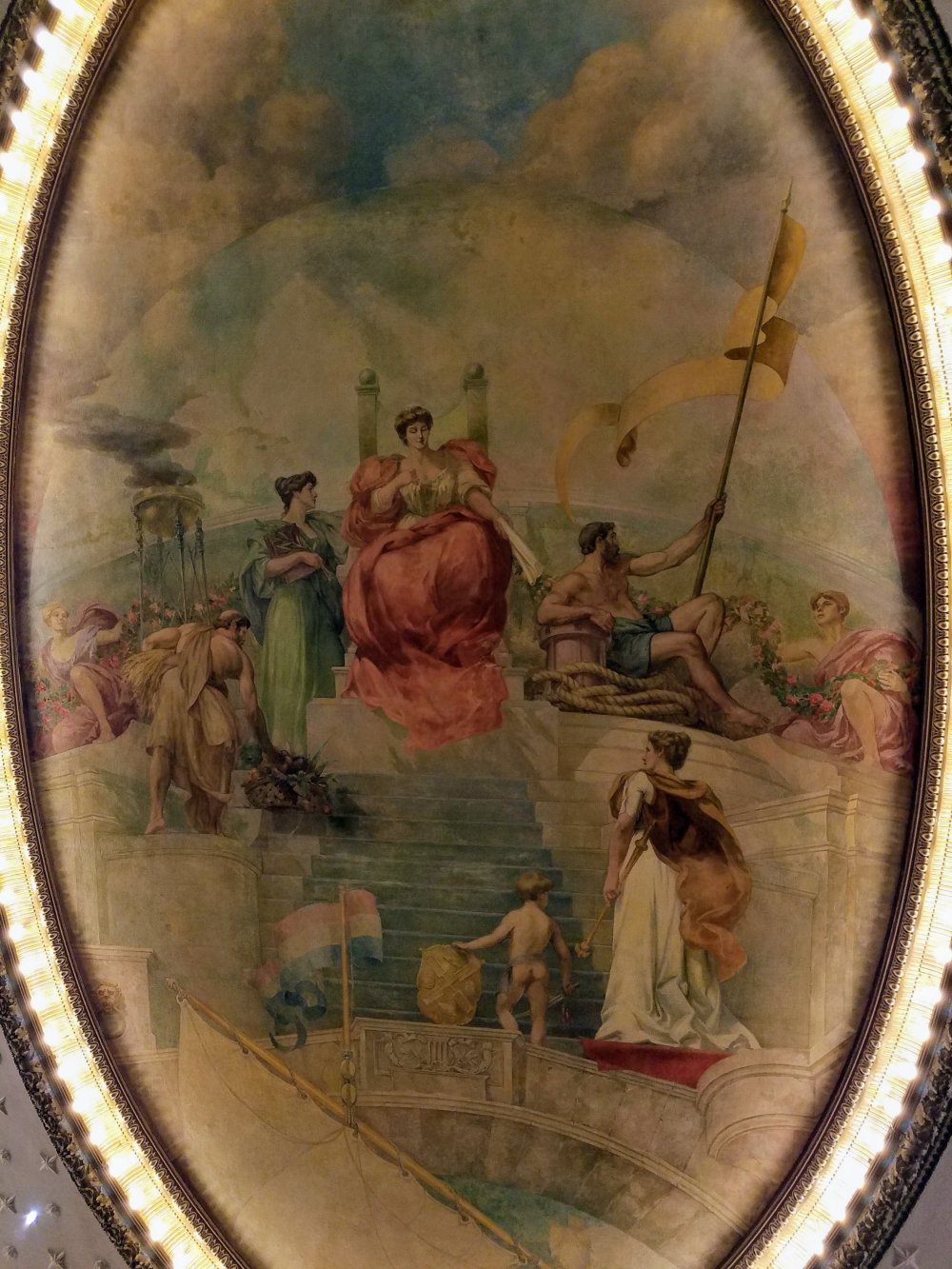 Finally, we were able to go upstairs into the upper level of the Chamber. The view is certainly better from up here, and it also allows you to get closer to some of the wonderful designs and artwork on the ceiling and walls. 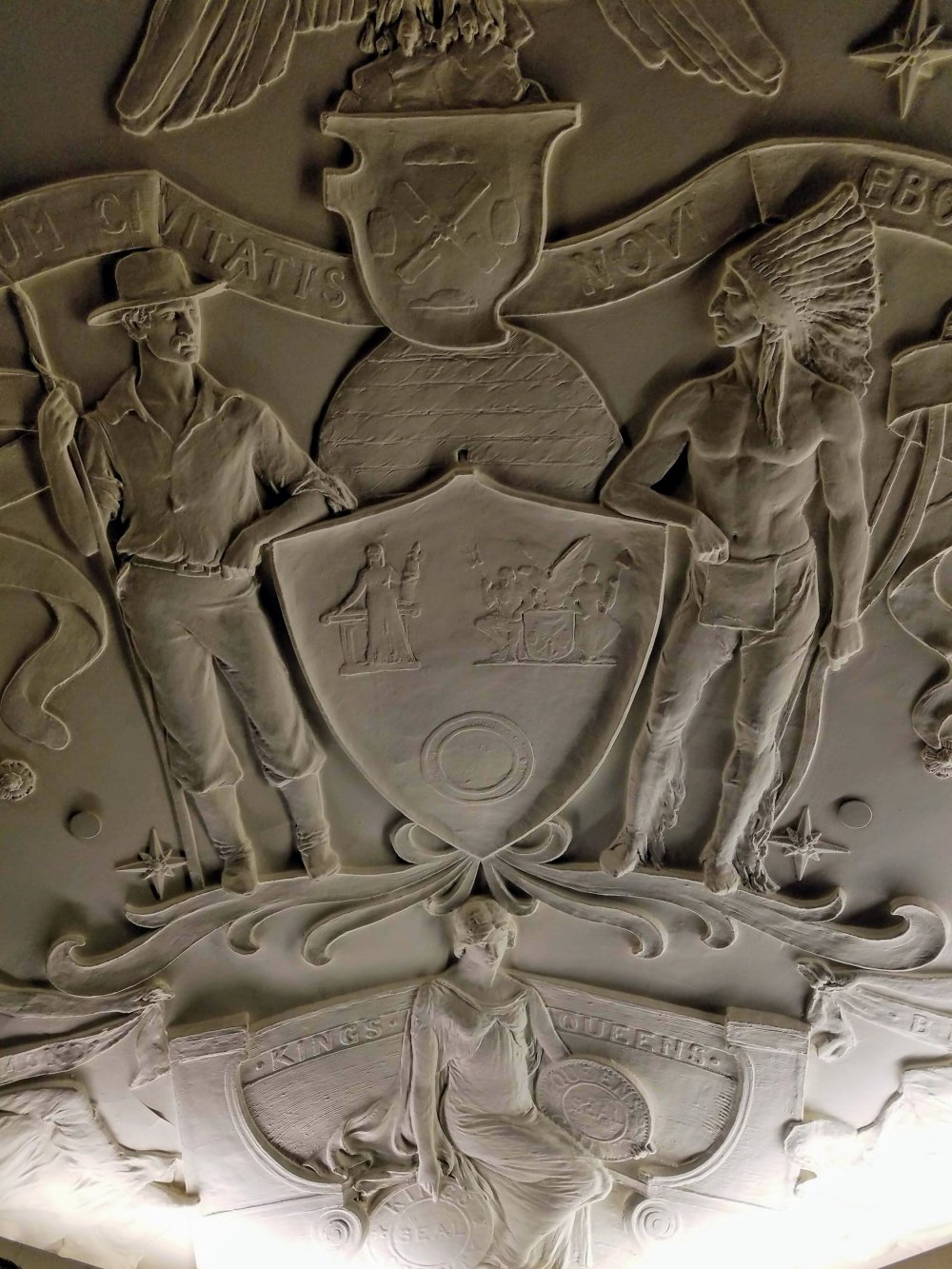 We also admired the gold trim along the walls where they meet the ceiling. This trim was made up of three repeating patterns, which are meant to represent the three origins of American law: Rome, Judeo-Christian tradition, and the Magna Carta.

And with that, we had to head back downstairs to conclude our tour of this spectacular building. We learned that New York’s City Council meets twice a month in the Chamber, and their meetings are open to the public. You can even sign up to speak at some of these meetings if you want to share your opinion on one of the matters on the agenda. So, if you don’t think you can make it to City Hall sometime soon for a tour, you can always go to an upcoming City Council meeting to get a peek at the rotunda and the Chamber!

Whichever way you decide to visit, I hope you’ll go check out City Hall soon. NYC is full of hidden treasures, but nothing could have prepared me for how incredible this building is and I think you’re going to be blown away by it, too. If you do visit, stop back and let me know what think!