Happy New Year, dear readers! I hope you enjoyed the holidays. Did you resolve to travel and get out and about more in 2020? Well, if so, I have just the place to add to your list! On New Year’s Day, my husband and I headed out to NYC’s JFK Airport to explore the brand new TWA Hotel. It might be 2020 for the rest of us, but at the TWA Hotel, you’ll be transported back to the 1960s!

About the TWA Hotel

The TWA Hotel can be found at JFK’s Terminal 5 in what was once Trans World Airlines’ iconic Flight Center. Designed by Eero Saarinen (who also designed St. Louis’s Gateway Arch), the original TWA Flight Center opened in 1962. Nearly four decades later, it permanently closed in 2001, just a couple years after the financially-struggling TWA went bankrupt.

In the ’90s, it had been discussed whether to demolish the Flight Center in order to build a new terminal that would better meet the needs of the changing airline industry. However, both the interior and exterior of the Flight Center were landmarked by New York City in 1994, making this plan no longer possible (it was later added to the National Register of Historic Places in 2005, too).

For the past couple of decades, there had been countless conversations regarding what to do with the site, and it wasn’t until 2014 before a plan was finally accepted: the site would be turned into a hotel! The ground-breaking took place in 2016, and in May of 2019, the new TWA Hotel officially opened.

What to See and Do

Just like the hotels in Las Vegas, the TWA Hotel is a destination in and of itself.  Even if you’re not a guest, there’s plenty to see and do here!

Once inside, you’ll see SO many fantastic features in the beautifully restored Flight Center! Check out this old-school departures/arrivals board. Notice that the staff are all wearing classic TWA-style uniforms, too! The staff uniforms at the TWA Hotel were designed by Stan Herman, who had also designed TWA flight attendant uniforms back in the ’70s.

When you first enter, you’re essentially in the hotel “lobby”. You’ll find the hotel check-in desk off to the left and the Food Hall off to the right. Scattered about this ground floor lobby area you’ll also find several antique cars, vintage TWA equipment, and old photos of celebrities who used to fly on TWA, including the Beatles, Eleanor Roosevelt, and more.

From the main entrance, if you follow the small flight of stairs up to the next level, you’ll find even more to explore! Here’s where the beautiful Sunken Lounge and shopping areas are located, as well as vintage payphones and posters and a giant Twister room (in keeping with the ’60s theme, of course). From the Sunken Lounge, you’ll also get your first glimpse of Connie, a 1958 Lockheed Constellation L-1649A airplane. 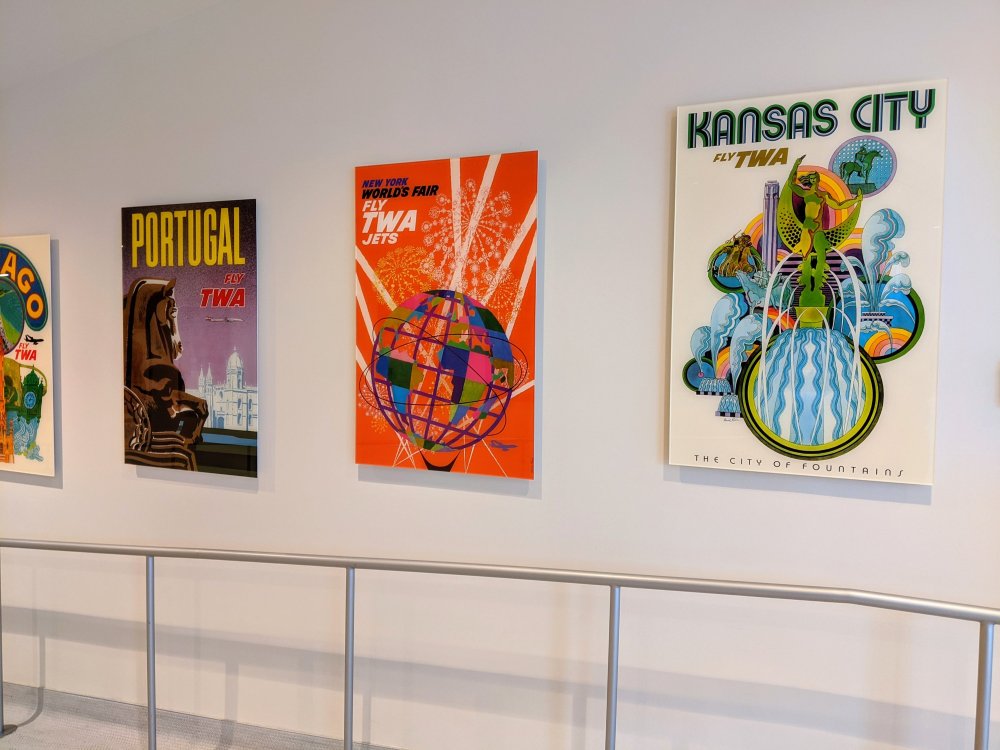 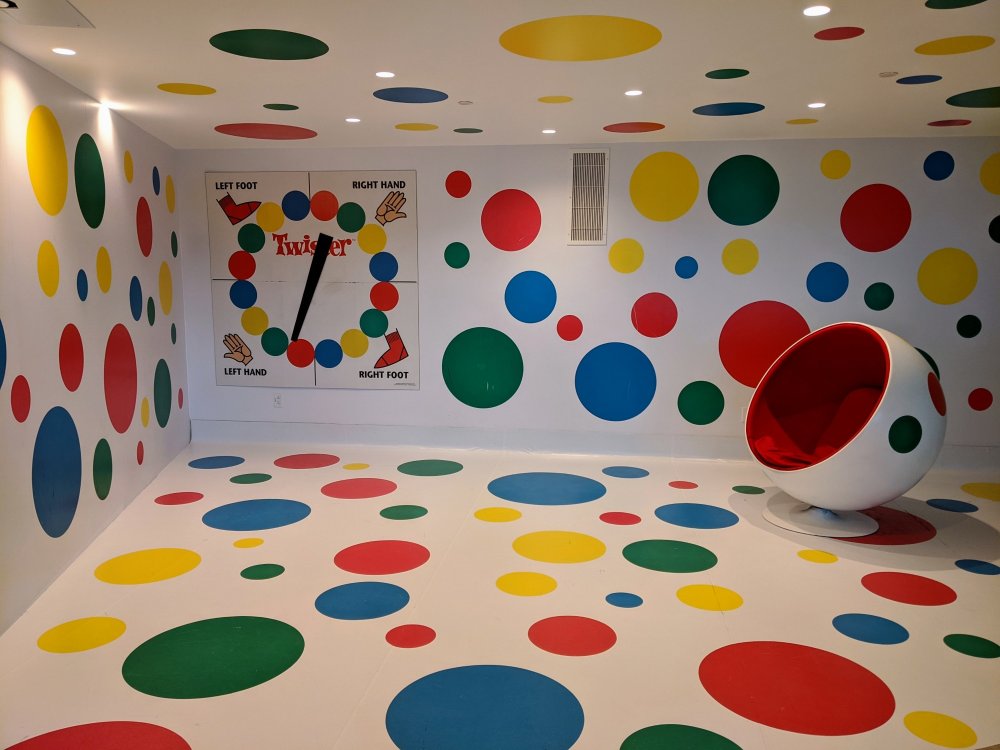 Connie had been in Maine until October 9, 2018 when she was separated into pieces and packed up onto two different trucks. From Maine, it took just over 20 days before Connie finally arrived at JFK early in the morning on Halloween. She was then put back together and placed just outside the Flight Center where she can be admired while you enjoy a cocktail in the Sunken Lounge.

You can actually have a cocktail INSIDE Connie! Because she’s a lounge now, too!

We did not personally settle in for a drink, but of all the places to enjoy a cocktail at the TWA Hotel, I would have to say that this is probably the most unique. A cocktail will run you around $16 and the food selection is limited to charcuterie, but how often do you get a chance to say you had a cocktail on a vintage airplane???

After visiting Connie, we continued to explore the hotel. First, we stopped by the ice skating rink which will be in operation through the end of February. You don’t need to be a guest at the hotel to use the rink, and they’ll even let you schedule a party or arrange to bring a group if you’d like.

Next, we headed up to the roof which was quite the attraction this summer. In addition to a rooftop bar, they also have an infinity pool. While this might not seem all that unique in the hotel, I can guarantee you that most rooftop pools don’t have this view!

Once we came back down from the roof, we set off to explore the iconic tubes that connect the TWA Flight Center to the JetBlue terminal, as well as to the new buildings that house the hotel’s guest rooms. We took a peek down a couple hallways in the hotel – the red carpet is definitely a theme here!

Through the tubes, you’ll encounter a few different museum exhibits. MCR/MORSE, who developed the new TWA hotel, spent several years collecting hundreds of artifacts from TWA’s history and worked with the New-York Historical Society to create the exhibits. When you visit the hotel, you can travel back in time and see re-creations of Howard Hughes’ office (he once owned TWA) and Eero Saarinen’s drafting table. 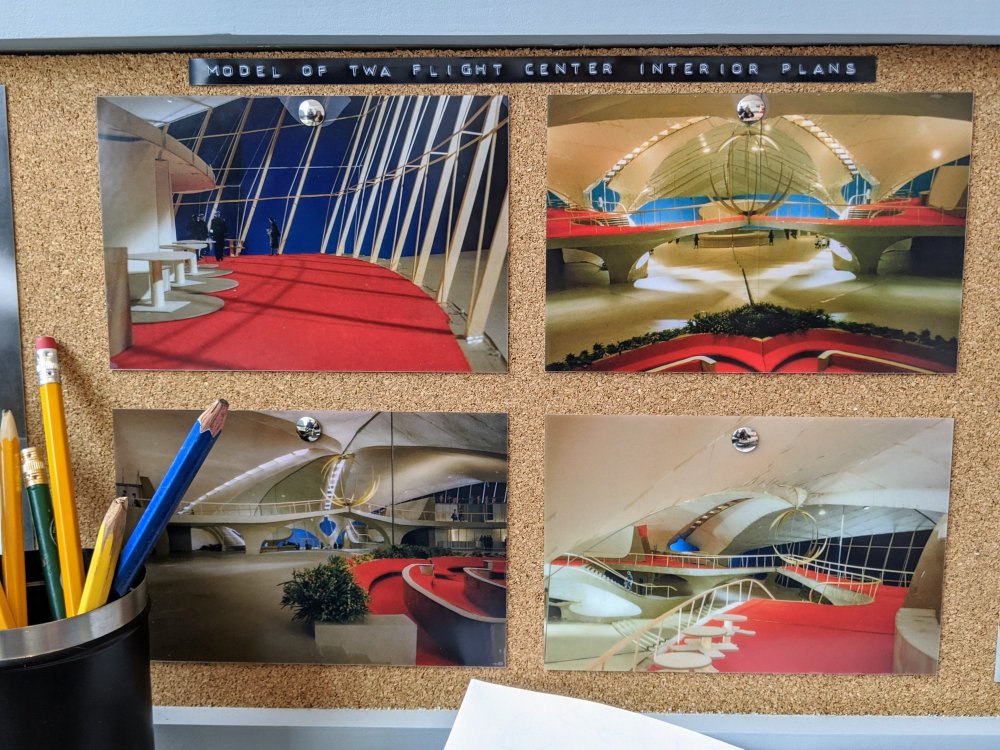 In addition to timelines and historical info postered to the walls here, there’s also a funky replica of a 1960s living room. Back out above the lobby, you’ll also find a display of more than 30 former TWA uniforms. 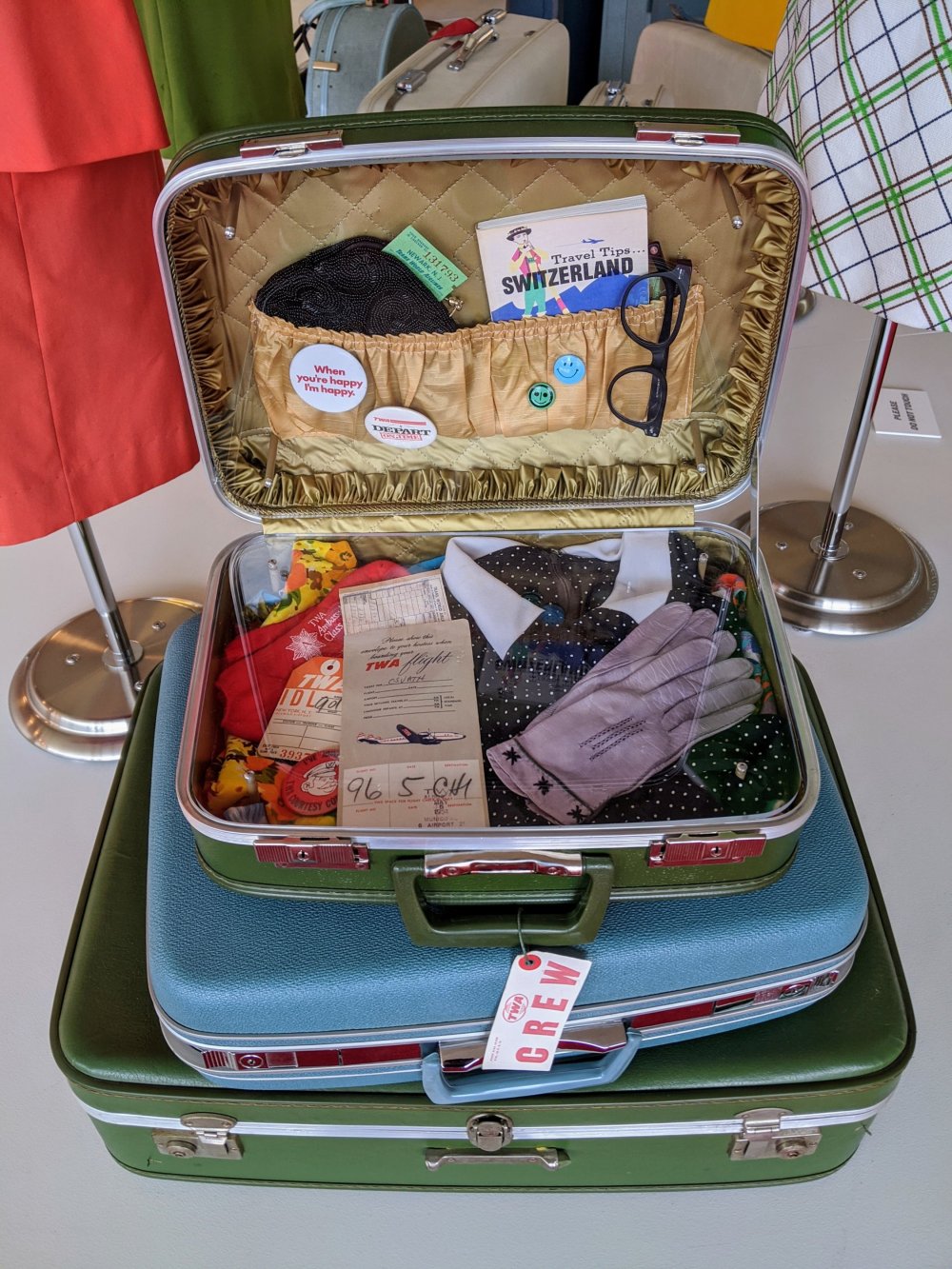 Though we explored most of the hotel, we didn’t get a chance to see inside any of the guest rooms or conference rooms, nor did we get to visit the 10,000 square-foot fitness center, which they claim is the largest hotel gym in the world. You do need to book a stay if you want to enter the guest rooms, and you’ll either need to be a hotel guest or buy a day pass or membership if you want to use the gym.

Rooms at the TWA Hotel start at around $249/night, and they also offer shorter stays during the daytime if you just need a place to relax and refresh during a long layover at JFK.

Our visit to the TWA Hotel was a fantastic way to kick off the New Year. If you’re stuck at JFK and need something to do, go check it out. And if you live in the city, you’re welcome to visit anytime!