Just as it is important to taste a bit of bourbon while you’re in Louisville, Kentucky, it is equally important that you make your way over to Churchill Downs, the home of the Kentucky Derby! Not only is there a fantastic museum that covers all things Kentucky Derby, but there is an excellent selection of tours, too. On our recent summer road trip, we stopped in for a quick visit to the museum and took the historic walking tour so that we could learn all about this beautiful and historic place!

We visited Churchill Downs after our e-bike tour at the Louisville Mega Cavern, which is not even a 10-minute drive away. Since we also had to get back downtown soon after for our Angel’s Envy tour, we didn’t have a ton of time for our visit at Churchill Downs. Fortunately, you don’t really need a lot of time to cover the basics there!

After paying for our admission to the Kentucky Derby Museum, we headed straight to their cafe to grab a quick bite to eat and had some surprisingly delicious chicken Caesar salads. I don’t normally have high hopes for museum cafe food, so the fact that these salads were so good was a bonus!

The even bigger bonus, though, is that while we were eating our lunch, we had a nice view of their resident thoroughbred, Afleet Model, who was wandering around in front of the barn just outside the cafe. When we finished scarfing down our salads we went out to say hello to him and his adorable “companion pony” Mitch, who was being a bit shy and hiding inside the barn.

Next, we headed into the museum to enjoy their two floors of exhibits. We watched several video clips from some of the past Derby races and wandered through and enjoyed all the different memorabilia from over the years that they had on display. For the youngins’ (and let’s face it, the young at heart), they have fun racing games and cool spots for taking photos, too!

The Kentucky Derby Museum offers a historic walking tour daily, every hour on the half hour. If you have enough time during your visit, they also show an 18-minute video in the museum’s theater right before the walking tour kicks off. We didn’t get to see it ourselves due to our time constraints, but it would likely help give you a more well-rounded experience at the Museum!

We joined the 2:30 pm tour, and it didn’t appear that there was any limit to the number of people who can participate. There were probably about 50 or so of us in our group, but our tour guide carried a microphone and speaker with him so we could hear his whole tour without any issues. You can’t make reservations, so just show up right before the half hour and join the next group heading out!

Our tour guide was a lovely gentleman named Bob. I asked him if was also an announcer at Churchill Downs because he had such a fantastic speaking voice. He said that though he has always wanted to, he has never had the chance to do so, but we were all lucky to get to listen to his lovely voice for the next half hour!

Bob started out by mentioning that the Kentucky Derby is the longest continuous sporting event in the U.S., which I didn’t know beforehand. The Derby has actually run every year, all through World War I and World War II and even the Great Depression, without missing a single year. Pretty impressive!

The first race was in 1875, and the winning horse was named Aristides. Where we began our tour just outside the back of the museum, we could see a plaque up above us with Aristides’ name, as well as plaques with the names of every other horse to win the Kentucky Derby in all the years that followed. As we walked along, no year was missing a name, and Bob pointed out that we wouldn’t see any names repeated either because only three-year-old horses are eligible to participate in the Derby. 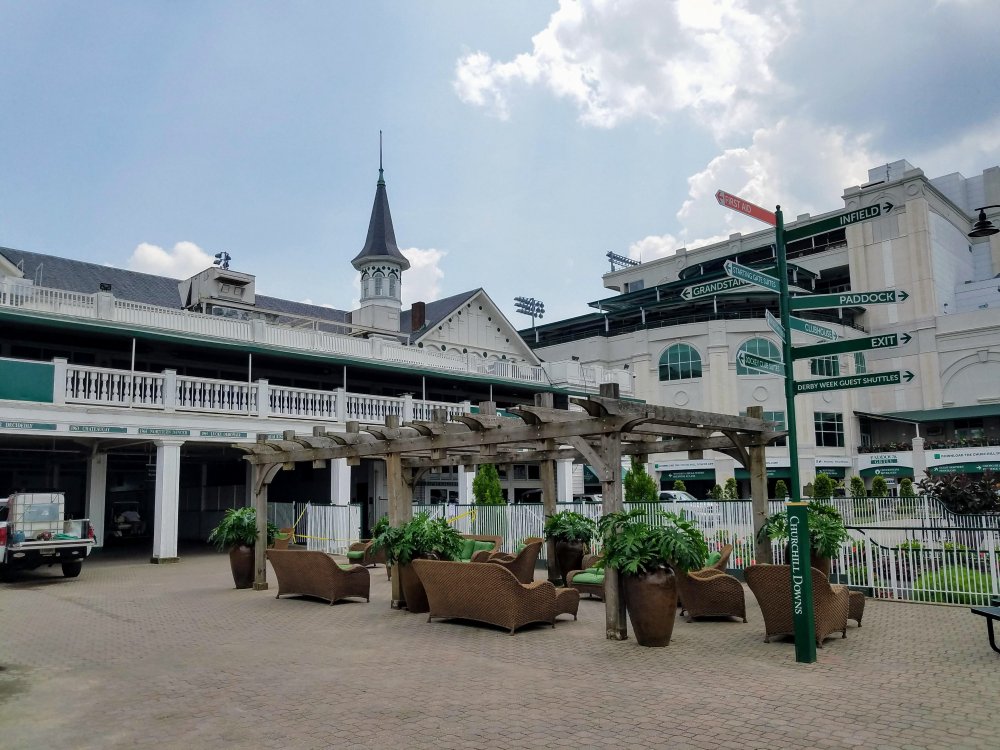 Some of those winners had their names displayed in gold, and this was a sign that the horse in question was not only a Derby winner but a Triple Crown winner as well (meaning the horse won the Kentucky Derby, the Preakness, and the Belmont Stakes, all in one racing season). There have only been 13 Triple Crown winners in all these years of racing, the first of which was Sir Barton who won in 1919 and the most recent being Justify, who won the Triple Crown in 2018.

Bob mentioned that about 22,000 thoroughbreds are born around the world every year, but only 20 will ever get the chance to run in the Kentucky Derby. It’s an elite group, and the fact that only 13 horses have ever won the Triple Crown just goes to show how special and elite those particular horses must have been!

As we headed over to the paddock, we first passed by some of the 1,200 wagering windows that can be found at Churchill Downs. A minimum bet at the Derby is $2 and there is no maximum limit, but all bets have to be placed in cash. In 2019, more than $30 million was collected, in cash, at these wagering windows!

Bob mentioned that in all the years of the Derby there has never been a robbery, but you could certainly see how it might be a target with all that cash floating around. Although, apparently there are a few thousand security guards floating around, too, so don’t be getting any ideas!

While passing the wagering windows, Bob pointed out a horse named Donerail, who won the Derby in 1913 with the highest odds ever recorded at the Derby. In fact, he was such a long shot that even his owner bet against him. Ooops! We also passed by the name plaque for a horse named Regret, who was the first female horse (or filly) of only three to win the Derby.

Once we reached the paddock, Bob shared some info about the jockeys who ride these majestic horses at the Derby. On average, jockeys are about 5’3”-5’4” in height and typically weigh around 110-115 pounds. Interestingly, jockeys and their saddles are weighed together both before AND after the race and their combined weight has to equal no more and no less than 126 pounds

Jockeys who don’t make the 126-pound weight requirement can add lead weights to their saddles to make up the difference. The reason they are weighed again after the race is to ensure that the jockey didn’t toss out any of the lead weights during the race, making them lighter as they came around the back stretch. Supposedly jockeys used to do this back in the day (essentially to cheat!) and this is where the phrase “get the lead out” comes from!  Who knew???

Before the Derby starts, the jockeys will all gather in the paddock to get on their horses. There are 20 stalls, though only 14 were numbered when we visited Churchill Downs. Most races only have up to 14 horses, so for the Derby, the stalls have to be renumbered to accommodate the larger field of 20. When it’s time to go out to the track, the jockeys climb up and ride their horses down through a tunnel, which we headed through next!

As you exit the tunnel, you find yourself right alongside the track and you can see just how enormous this place actually is! Churchill Downs’ grandstand holds 60,000 people and runs the entire length of the stretch (which is a quarter-mile long). 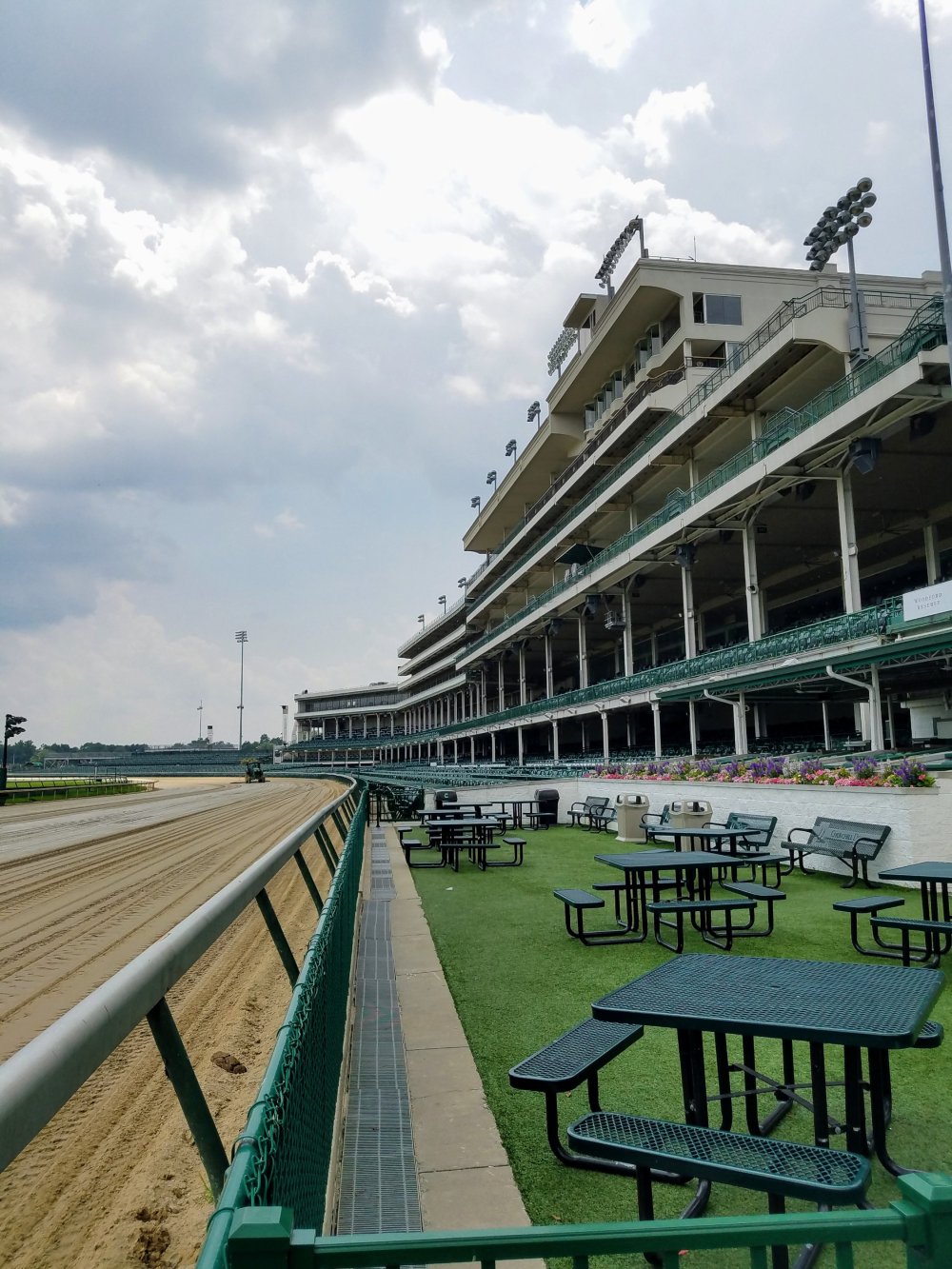 The stands are massive, with plenty of boxes for the celebrities and high rollers, but all the action seems to happen in the infield, which holds around 100,000 people during a typical Kentucky Derby. Bob mentioned that on Derby Day, the infield at Churchill Downs officially becomes the third-largest city in Kentucky – that’s how many people come out to party and watch the race on the Downs’ 19-story high and 600-ton TV screen.

While standing alongside the track, we watched a tractor come through to touch up the one-mile-long track’s surface, which is made of sand, Ohio River silt, and a little bit of clay. We also admired the beautiful twin spires over the grandstand. These were added in 1895 and they are not only the symbol of the Churchill Downs race track, but they are also a historic landmark!

We were able to stand inside the Winner’s Circle that is used for all the other races that take place at Churchill Downs, but there is a special place in the infield specifically for the winner of the Kentucky Derby. We could see it from where we were standing, but as Bob said, it’s pretty sacred ground and only the winners get the privilege of standing there.

Before we headed back to the museum, Bob also pointed out the various markers on the track, including the starting and end points for the Kentucky Derby, which is a 1.25 mile-long race. While standing there, he told us about Secretariat, the 1973 Kentucky Derby and Triple Crown Winner, who still holds the Kentucky Derby’s record of 1 minute and 59.4 seconds.

Bob referred to Secretariat as a super-athlete, and it sounds like it’s true. He explained that in his Kentucky Derby win, Secretariat actually ran in reverse splits, which basically means that for every quarter mile he ran, each was faster than the last. That is not normal! Apparently, Secretariat also won the Belmont Stakes by 31 lengths, which is just insane. Bob pointed out the finish line and another spot quite a ways back to illustrate just how far 31 lengths really is.

Bob also told us that after Secretariat died in 1989, they performed a necropsy on him to see if there was anything special about him, physically, that made him such an amazing horse. As it turns out, though most horses’ hearts weigh around 7-9 pounds, Secretariat’s actually weighed about 21 pounds! This would have enabled him to pump more blood and oxygen through his body, giving him that edge in racing. (And though he sired more than 600 offspring, none of them went on to be Derby winners!)

And oddly enough, there is a tradition when a racing horse dies to only bury their head, heart, and hooves, yet Secretariat was one of three that was actually buried whole. When we headed back out to the museum, Bob pointed out a few gravestones where the parts of five other former Derby winners have been buried.

According to the sign placed above the stones, the head is meant to represent the will to win, the heart represents courage, and the hooves represent speed. It seems a bit morbid, yet at the same time, it’s a beautiful tribute to an even more beautiful animal.

And sadly, that brought our tour to a close. It is only half an hour long, and we really felt like there must have been so much more to explore. And there is! If you have the time and you’re looking for a more in-depth experience at Churchill Downs, you can sign up for one of their specialty tours, several of which take you behind the scenes and even let you get up close and personal with some horses!

Though the museum is open year-round, not all of the tours are offered all the time, so be sure to check their schedule and book your experience in advance. If you just want to check out the museum and take the history tour like we did, though, just show up! They’re open daily except during major races and holidays.

So, if you find yourself in Louisville, head on over and learn all about “the most exciting two minutes in sports!”

Have you ever been to Churchill Downs? What did you think of this spectacular place?