NYC has a long and fascinating history, and as time goes by, I’m more and more surprised by the things I learn about this incredible city. Some of the history is good, some is not so great, but no matter what, it’s usually pretty interesting. For example, last weekend we found a delightful hidden treasure out near the Rockaways where you can, quite literally, dig up NYC’s past. And this intriguing little place is the Glass Bottle Beach at Dead Horse Bay.

Back in the day, there was a place out in Jamaica Bay called Barren Island. It was originally home to the Lenape Indians (just like most places in the NYC metro area), and it was passed on to the Dutch in the late 1600s. Dutch settlers eventually made the island their home, and over time, more immigrants found themselves on little Barren Island.

Around the 1850s, Barren Island became home to a whole lot more, and my friends, it wasn’t pretty! For the next 80 years, Barren Island was not only where Manhattan, Brooklyn, and the Bronx sent all their trash, but it was also where fish was turned into fertilizer and where the city’s dead horses were sent to be boiled and rendered down into glues and oils. The remaining bones were chopped up and dumped into the nearby water, hence the name Dead Horse Bay.

At its peak, Barren Island was home to around 1500-2000 people, mostly immigrants. The stench is said to have been so unbearable that Barren Island could be smelled from miles away, and yet people lived there year-round and earned their living from the rendering plants or from picking through the garbage for salvageable items.

By the 1920s and 1930s, cars were becoming more popular as the primary mode of transportation, which means horses were being used less and less. Eventually, all the horse-rendering plants closed, and Barren Island and several other smaller nearby islands were all joined to the mainland with landfill in order to build Floyd Bennett Field, NYC’s first municipal airport.

The end to Barren Island’s inhabitants, though, officially came in 1936 when they were all evicted by Robert Moses in order to build the Marine Parkway Bridge. A few holdouts stayed on for several more years, but by the mid-40s, everyone was gone. And just like that, an entire piece of NYC history just…disappeared.

What You’ll Find There

While building the Marine Parkway Bridge, garbage and debris were used to increase the amount of land around Barren Island. Unfortunately, it wasn’t properly covered and so debris actually started escaping and floating up to the water’s surface in the 1950s. Since then, more and more garbage continues to come to the surface even still today.

And not just garbage…but some of those old horse bones continue to wash up onto the shore as well! 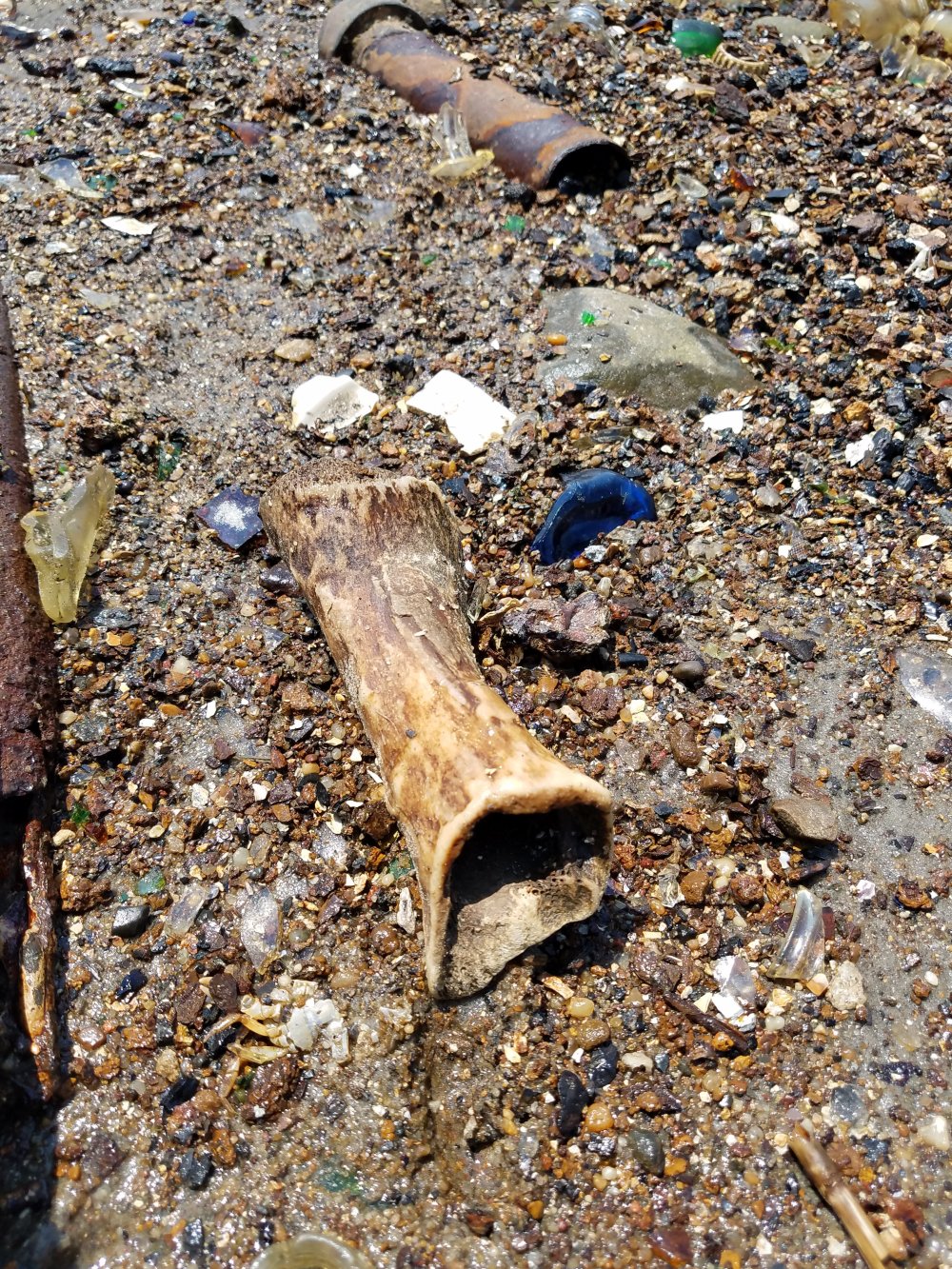 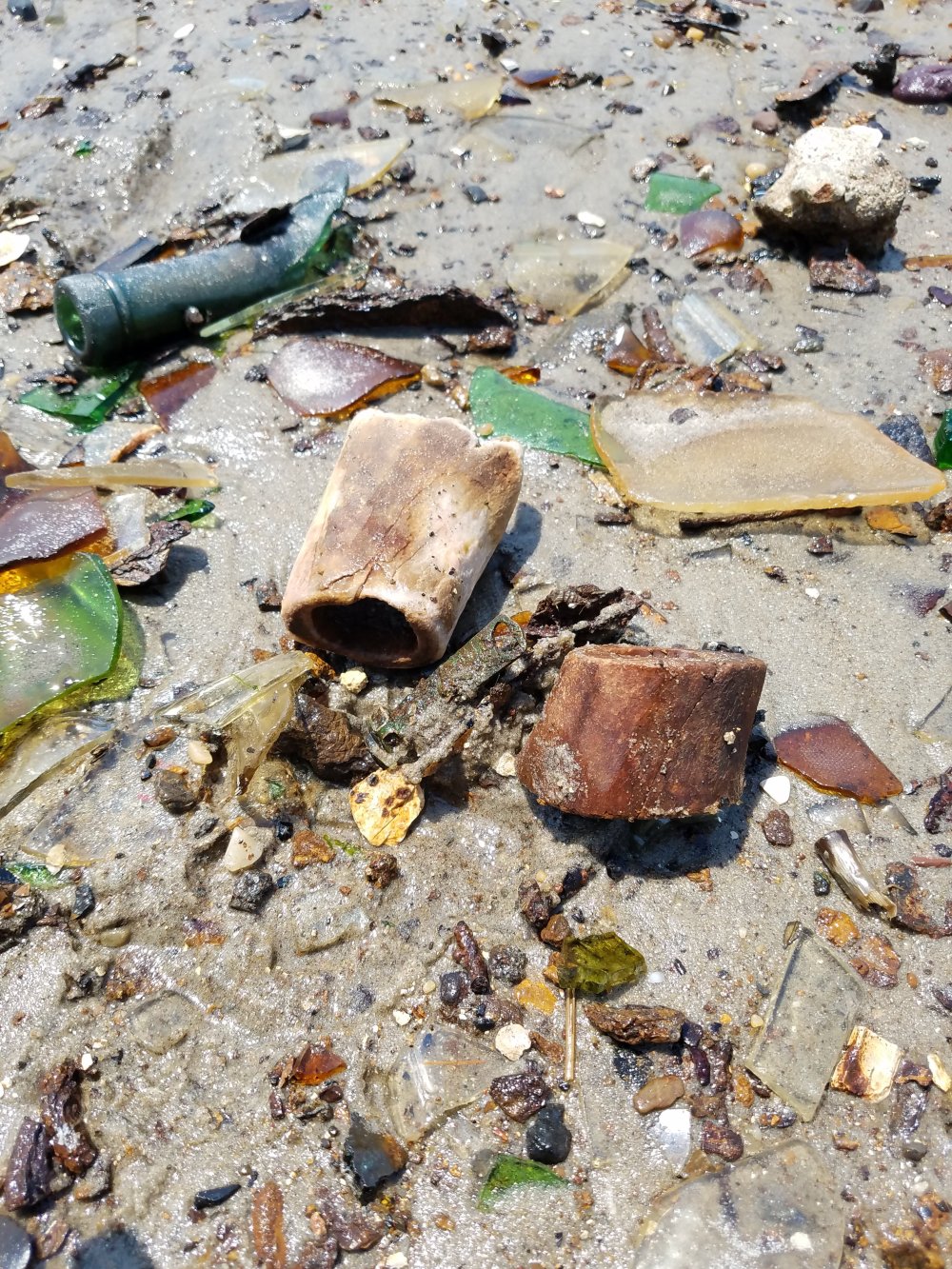 Nowadays, this filled-in area on Dead Horse Bay is called Glass Bottle Beach, and it is a scavenger’s dream. There is plenty of broken glass to be found, but there are a ton of fully intact bottles as well, some of which are over 100 years old. When the waves roll in and out, you can hear the broken glass tinkling along the shore, and it sounds just like a wind chime.

Bottles, cutlery and dishes, floor tiles, toilets, sinks, old-school electronics and boat parts, TONS of shoes, pantyhose, and so much more can all be found along Glass Bottle Beach. I’d say that you can find everything but the kitchen sink here, but we actually SAW a kitchen sink, so they’ve got that covered, too. 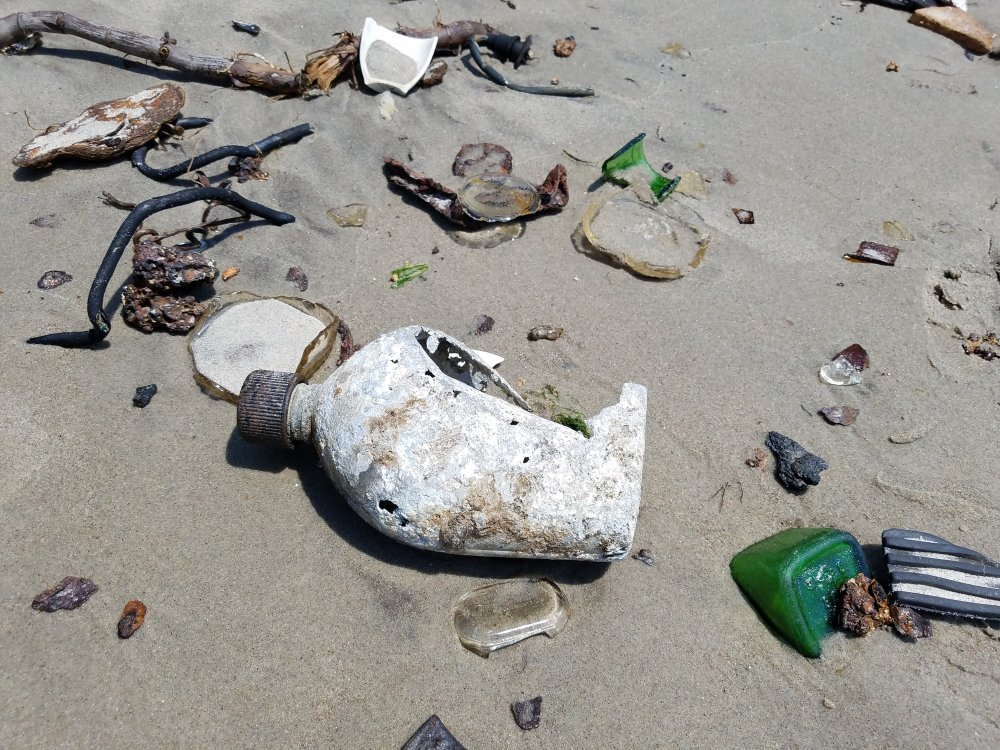 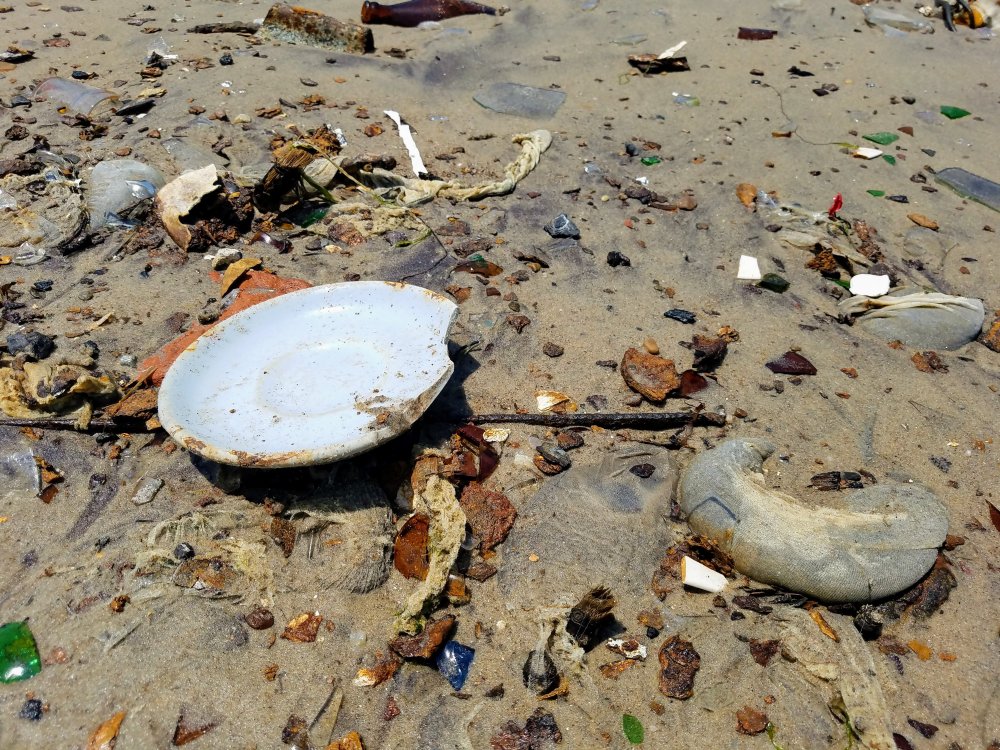 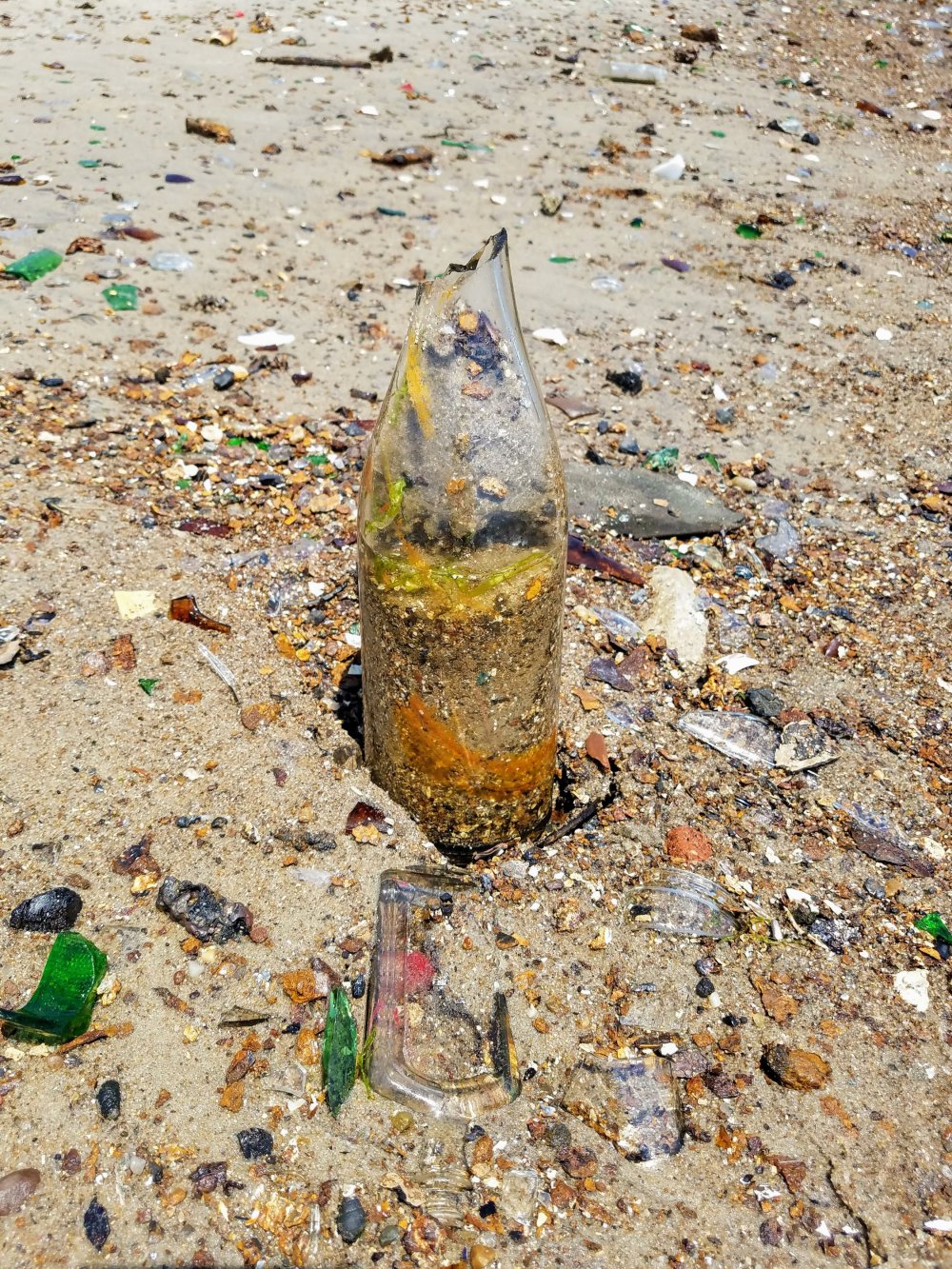 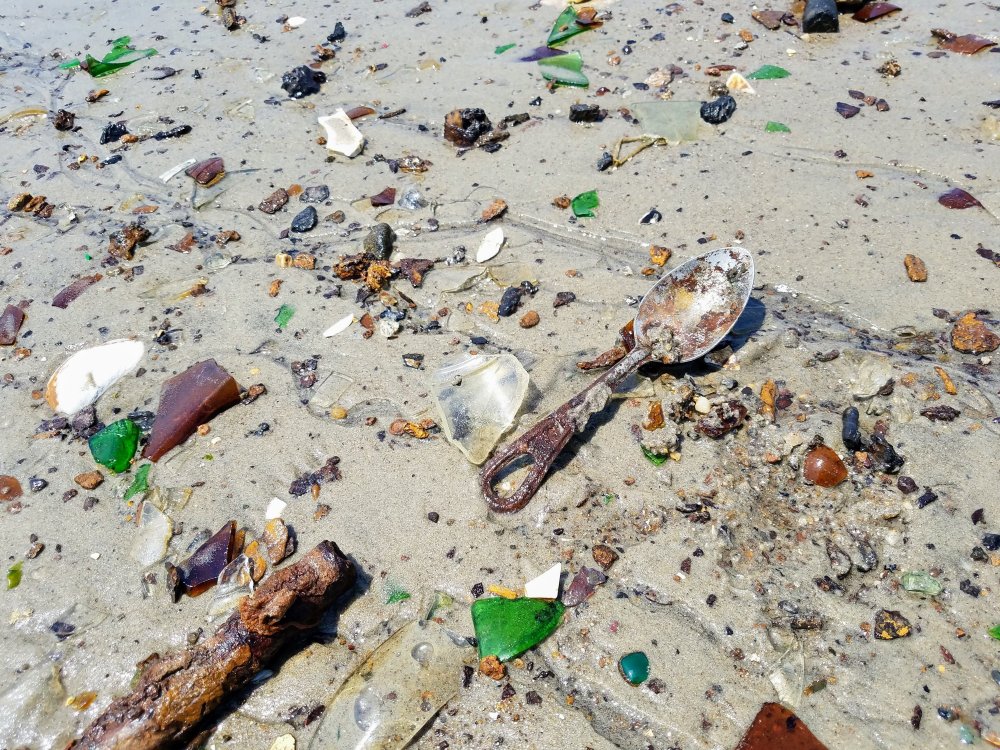 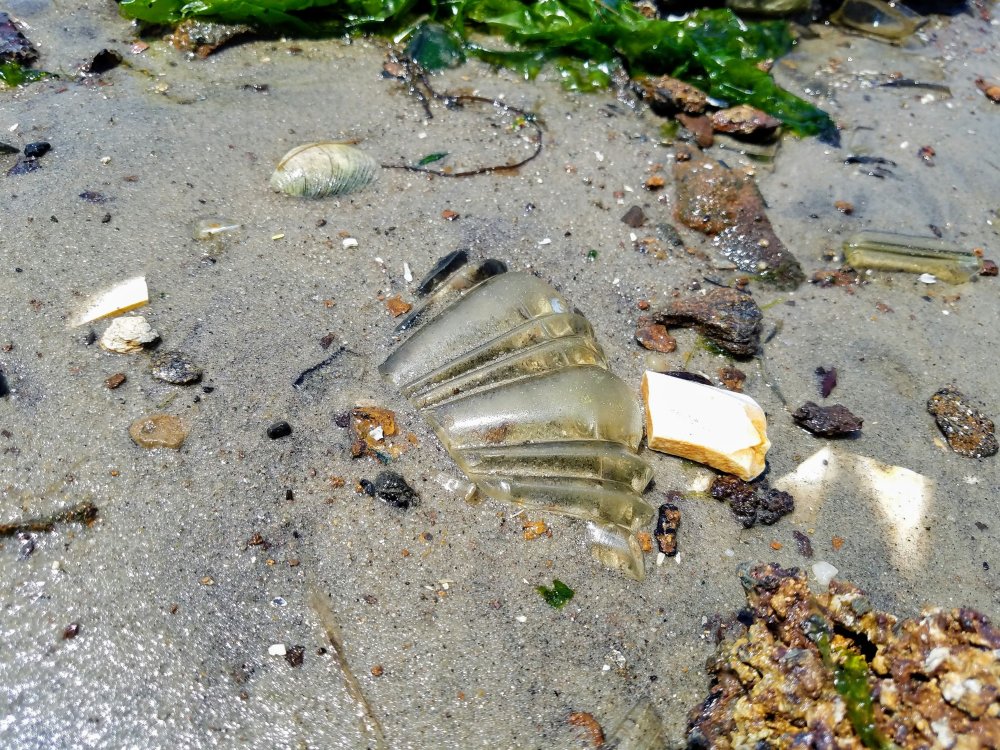 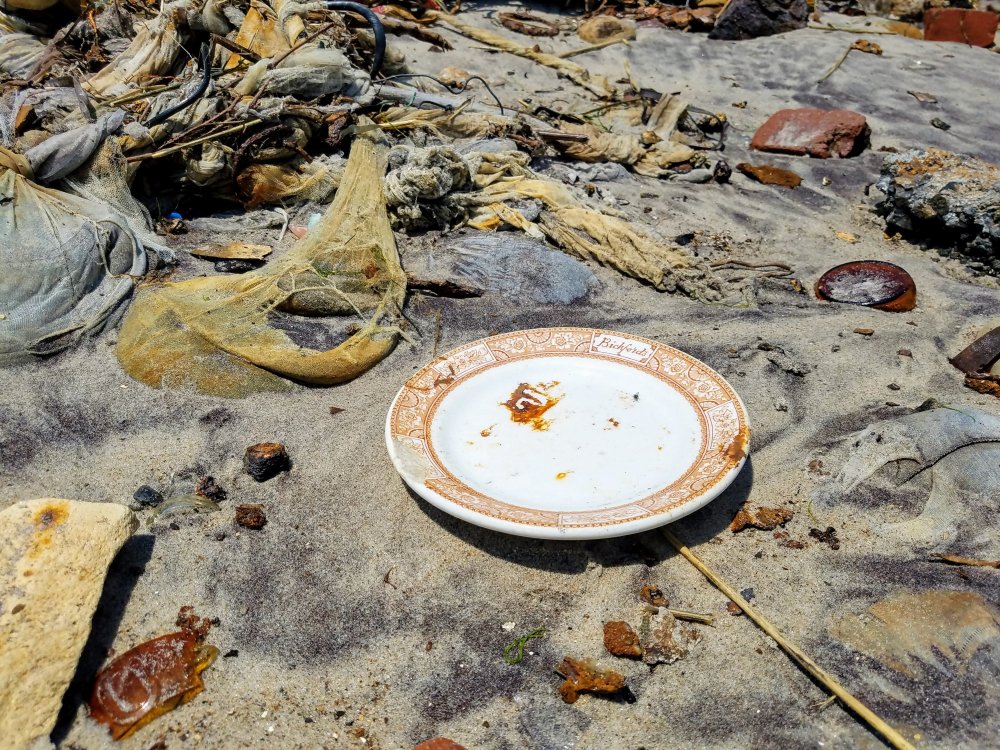 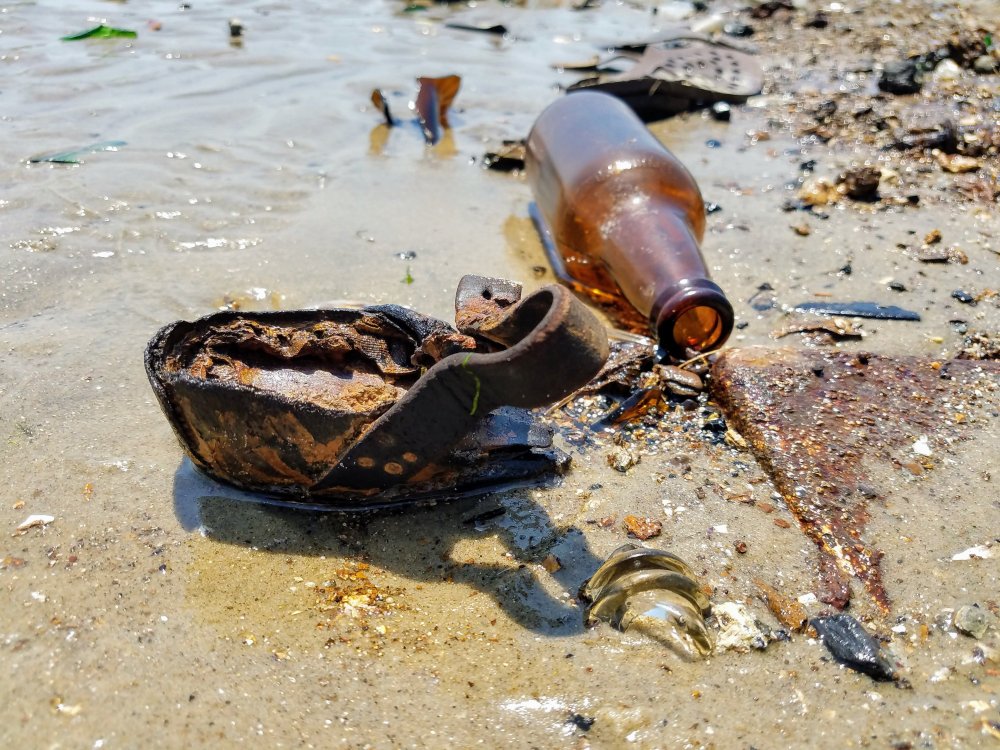 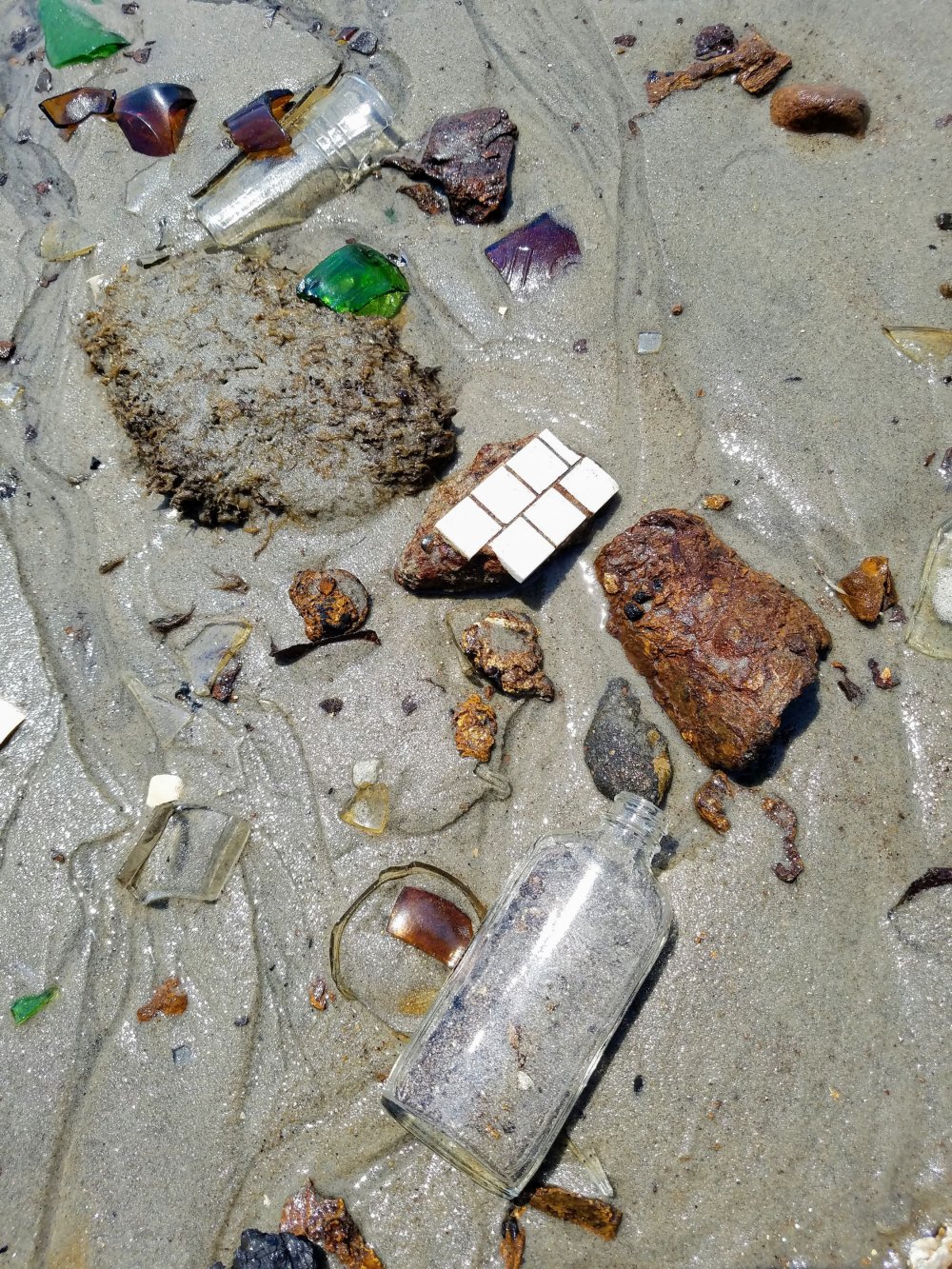 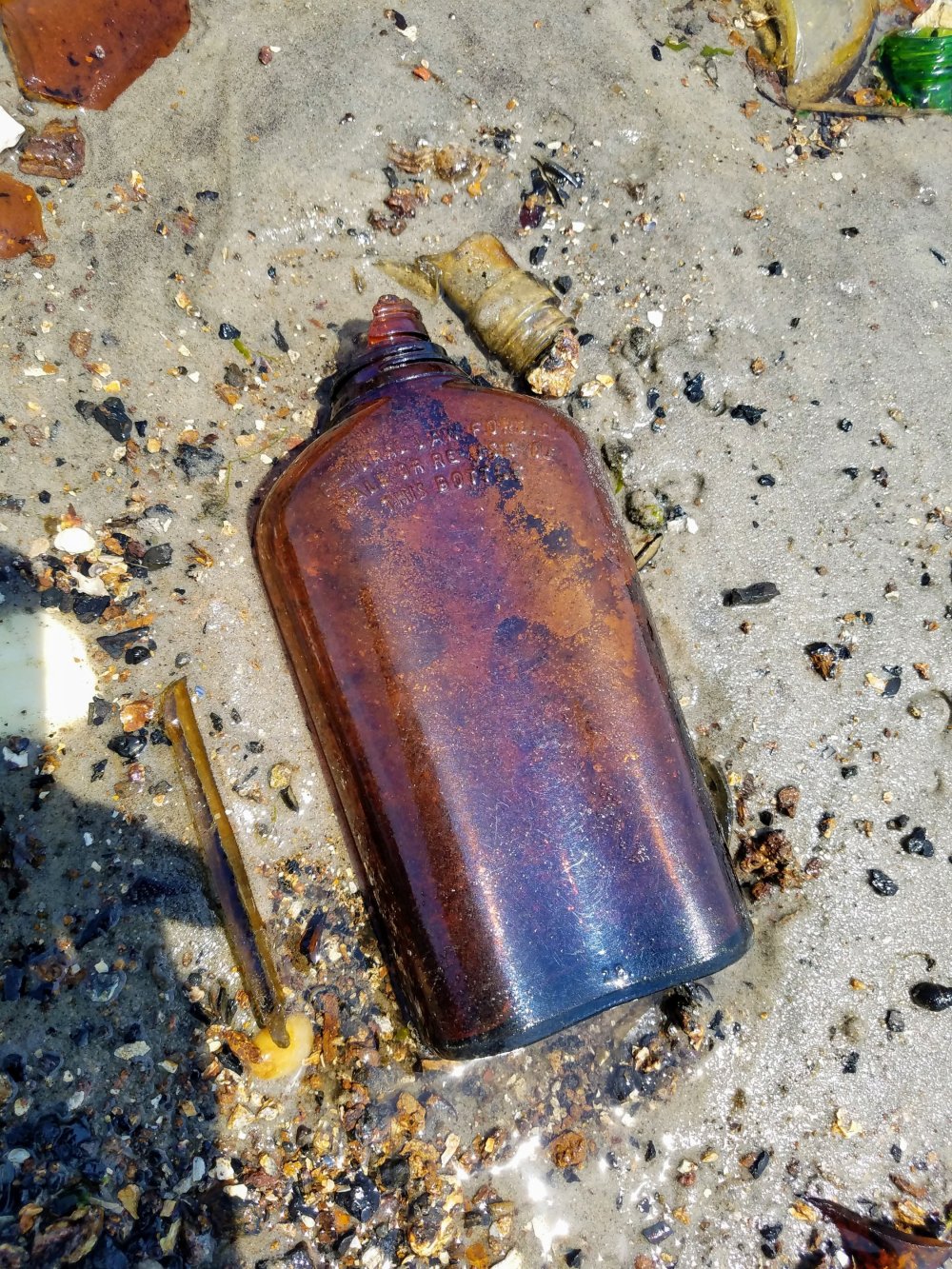 On one hand, it’s heart-breaking to me to imagine what it must have been like to have lived in a place covered in trash and dead animals, but Barren Islanders had a fully functional and self-contained society here, complete with a school, stores, and saloons.

It’s also incredibly sad to stand at Glass Bottle Beach and see all this garbage just sitting in the waterway, and it’s a bit appalling that NYC hasn’t taken any steps in recent years to try to address the impact all this garbage in the water must have on wildlife and water quality in the area.

On the other hand, though, Glass Bottle Beach at Dead Horse Bay is also a fascinating place to observe years and years of NYC history, and there is a strange beauty in seeing all that lovely glass in so many shapes, sizes, and colors.

It reminded me a bit of my visit to the NYC Treasures in the Trash Museum. Seeing so much that has been discarded and then collected all in one place…you just can’t help but imagine who the previous owners were and why they got rid of this and that. I also couldn’t help but wonder if any of the items we sifted through had belonged to the previous residents of Barren Island itself.

How to Get There

So, by now I’m sure you’re intrigued and want to check this place out for yourself, right? Well, it’s fairly easy to find, especially if you’re driving or taking the bus. If you’re driving, head out to Floyd Bennett Field, and right before the Marine Parkway Bridge, turn left onto Aviation Road into the main entrance, drive past the guardhouse, and there is a little parking lot on the right where you can leave your car. (There are restroom facilities available here, too!)

Or, you can take the Q35 toward the Marine Parkway Bridge and get out at the last stop before the bridge. Either way, once you’re in the area, you want to be on the Rockaways-bound side of the street where Aviation Road and Flatbush Avenue meet. There is a little trailhead here, and this will take you down to the beach.

The trail isn’t marked and shortly after you start walking down the trail, you’ll come to a three-way split. Either split here will take you down to the beach, but I would recommend taking one of the outer trails, walk all the way around the beach, and then come back out on the other outer trail so you can see everything without needing to backtrack.

So, next time you get a beautiful weekend day, check a tide chart to find out when it’s going to be low tide, and head out to Glass Bottle Beach at Dead Horse Bay to see what you can find. Low tide will allow you to see as much as possible and you’ll be able to walk out even further to see parts of the shore that might normally be covered (just be aware that you may also sink into the sand quite a bit, so you’ll want to wear some good boots!)

And if you do plan to do some scavenging, I would highly recommend bringing some heavy duty gloves. It’s hard to say what nastiness might be attached to the stuff you’re pawing through, and some of the old electronics are a bit rusty, too, so definitely scavenge carefully!

Even if you’re like us and just want to look and not bring anything home, Glass Bottle Beach at Dead Horse Bay is a fantastic place to spend a few hours. Keep your eyes down because you never what you’ll find. Everywhere we turned, something new and interesting was peeking out of the sand or being pushed onto shore by the gently rolling waves, just waiting for us to discover it.

What do you think? Would you like to visit Glass Bottle Beach at Dead Horse Bay?

If you’ve already been, let me know about some of the treasures you found on your own visit!