I’m not a native New Yorker, but I’ve lived here for 15 years and have done A LOT in the city over those years.  After visiting many of the major tourist attractions, I started to seek out some of those lesser-known destinations, and I have to say–this city continues to surprise me with the amount of weird stuff we have here. Case in point–did you know that there is a whole museum dedicated to Houdini, featuring all sorts of Houdini memorabilia and props?  Well, I didn’t!  At least not until recently.

Earlier this summer, I came across an article about some of the more unusual and, in some cases, hidden museums in the city and learned about the Houdini Museum.  I asked my husband if he knew anything about it or had ever been. He said no, but then he got surprisingly excited about the prospect of going. Apparently, he had long been a fan of Houdini. Hou(dini) knew?  Anyway, we had dinner plans in Midtown recently, and I suggested that we check out the museum beforehand.

The Houdini Museum does a bit of a disappearing act itself because if you didn’t already know it existed, you would never just happen by it.  The museum is located within a magic store called Fantasma Magic…on the fourth floor of a Midtown Manhattan office building. When you enter the building’s lobby, it looks like any other lobby for any other office building.  We confirmed with the guy at the desk that we were in the right place, and he sent us right up to the 4th floor. Upon exiting the elevator, there is a very cool door that looks like a safe or vault door.  I’m pretty sure it’s not actually part of the store or museum at all–there was no sign to indicate that it was–but seeing that vault door really set the vibe for me.  And then as you walk into the store, you’re immediately greeted by a bust of the man himself.

Being a magic store, there was also, of course, a magician in the process of hypnotizing a teenage boy when we first came inside. Supposedly, there are often magicians there doing tricks for the store’s patrons, and the store also offers lectures and demonstrations.  And if you’re in the market for tricks or books on magic, the store sells stuff like that as well, but we were there primarily for Houdini.  So we jumped right in, wandering around and reading about the man and his antics.

Harry Houdini, née Erik Weisz, was born in 1874 in Hungary and moved to the U.S just four years later. As a teenager, he read a book about a French magician, Robert-Houdin, and Harry later adapted Monsieur Robert-Houdin’s name to create a new name for himself: Houdini.  He began performing as a magician in the 1890s and shortly after, he met and married his wife, Bess, who joined his show and performed with him throughout his career. He was still actively performing up until his death in 1926 at the young age of 52. He died from a ruptured appendix, and it has been speculated that it ruptured as the result of a punch to the stomach (though that has never been officially confirmed.)

Houdini is perhaps best known as an escape artist, and many of the items from which he escaped during his career are featured in the museum, including all sorts of handcuffs and locks.  There are also several old advertising posters from his shows, as well as some of the costumes Bess wore during performances. One item that stood out to me in particular was something called the “Punishment Suit”, which was accompanied by a letter from a police department, basically taunting Houdini to try to break out of their suit.  To which my husband commented that it was a little unsettling that the police even had something at some point called a Punishment Suit…   But, it wasn’t anything that Houdini couldn’t escape!

While I was reading about the Punishment Suit,  my husband was intrigued by another object.  He had recently completed a scuba certification class, and on display at the museum is one of Houdini’s diving masks (of his own design), as well as images from the original patent application for the mask. 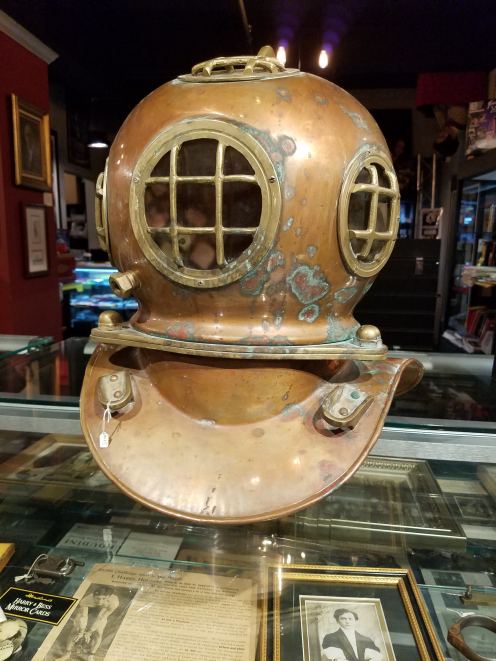 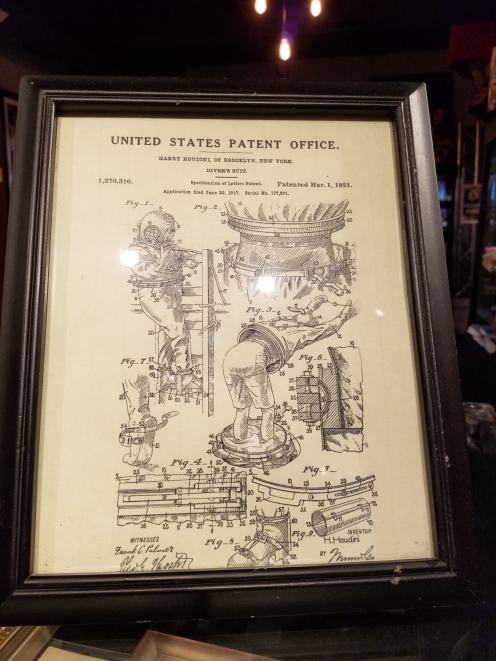 Finally, one last item that we were curious about, but which had no card, was a metal machine that reminded me a bit of the Tin Man from the Wizard of Oz.  I was curious to know what it was after we left, so I did a little research and discovered it was the robot from one of the films Houdini was in, called The Master Mystery, which was actually a silent film released in 15 episodes.

The museum itself is quite small, and even if you read all the information cards on the items, you can probably visit the whole place in about a half hour (unless someone tries to hypnotize you or you stick around to watch some magic tricks).  So, if you find yourself killing some time in Midtown or if you’re now just generally intrigued, it’s the perfect place to pop into to learn a bit more about the crazy life of Mr. Houdini!