When I first moved to NYC in 2003, I decided to live on Staten Island.  And I then proceeded to stay there, in the same apartment, for eleven years!  Staying in one apartment for that long is somewhat unheard of in NYC, but I loved my place and they only raised my rent once in all the years that I lived there.

In 2014, I moved to Brooklyn, which I love, but I still have a soft spot for Staten Island.  Every now and then, my husband (Mike) and I will venture over to see what’s new on the island and to check out some of the places I never got to visit when I was living there without a car.

Yesterday was our only day off in the past week, and we were desperate to have some fun and spend some time outside.  Mike recently mentioned mini golf, and it got me thinking about our summer trip to Lake George last year.  We went to a cute little place to play mini golf and ride go-karts, and we had an absolute blast!  We had been chatting the past couple weeks about making a trip back to Staten Island, and I recalled that there was a go-kart track visible from the highway.

A quick Google search and a couple minutes later…and we discovered the track belonged to a place called Staten Island FunPark.  We read some reviews and it seemed like it would be a fun place to spend an hour or two, so off we went!

The place is tiny, but it’s conveniently located right next to the SI Expressway off exit 12.  There is a decent-sized parking lot, and we were pleased to discover there were only about a dozen cars there already.

We did the $18 combo pack which gets you a ride on the go-karts, 3 tokens (20 pitches/token) in the batting cages, and a round of mini golf.  For NYC prices, this is actually a bargain!

First stop…go-karts!  It was just Mike, me, and another random guy with his son who got out on the track together.  Since there was no one waiting, we were able to drive for quite a long time.  The course was small, but it was nicely laid out with lots of turns.

Next up…the batting cages!  I haven’t swung a bat in over a decade, so I wasn’t sure how I was going to do.  They had cages for slow, medium, and fast pitch with either baseball or softball options. I chose slow-pitch softball.  First of all, it wasn’t actually all that slow.  Second, they were coming in reeeeallllly low.  A lot lower than I’d expect for slow pitch softball! I missed the first 4 pitches, but then I was on my way.  It was so much fun! Brought me back to my childhood and all those summer days out at the softball field.

Finally, we wrapped up our visit with a round of mini-golf.  As we were starting the first hole, it started to sprinkle a bit.  You can see in the picture below that it was a bit cloudy!  I went first and made my ball, but as Mike was starting to putt, the skies just opened and poured on us!  Fortunately, there was a little party tent set up outside where we could run and hide until the rain passed. 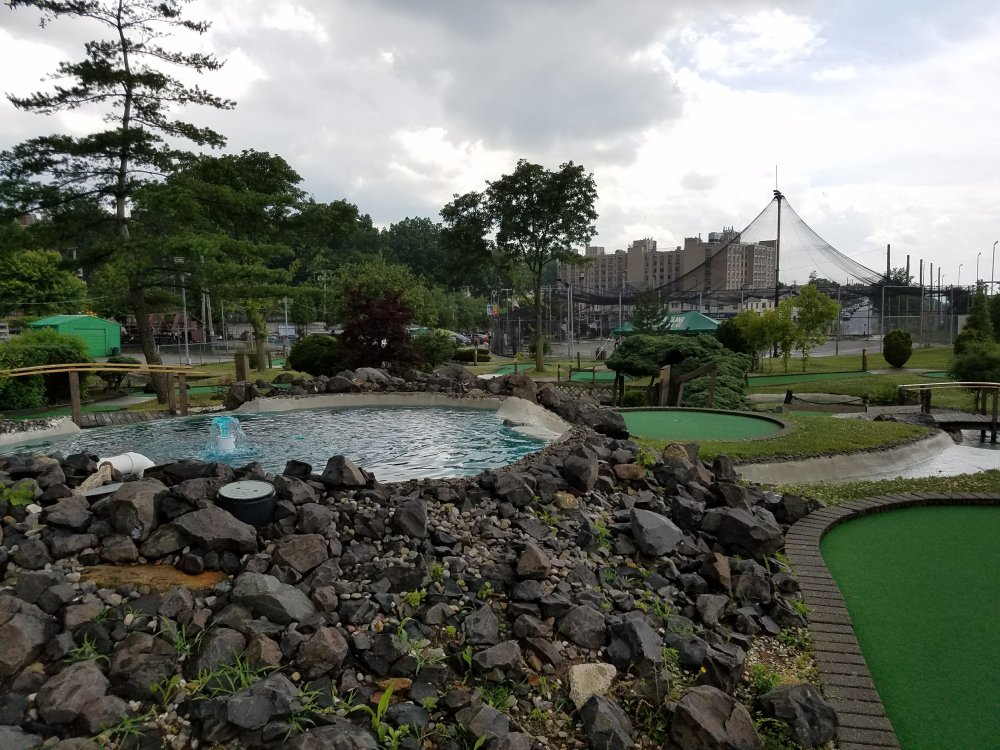 Eventually, the rain stopped and the sun came back out and we finished up our game.  Sadly, I lost, despite being tied after the first nine.

All in all, we had a really fun time, and I would definitely recommend Staten Island FunPark to kids and adults alike!

After, we went to the Staten Island Craft House, which we discovered on a previous trip to Staten Island.  We enjoy craft beer tastings, and the Craft House is affiliated with SI brewery, Kills Boro.  The beer is great, and we also enjoyed an appetizer we discovered last time, the roasted corn dip.  Hot and cheesy, served with tortilla chips!  We just had that as a snack this time, but the burger is also really delicious.  And…they’re in walking distance from the ferry in case you don’t have a car!